Check your head for lead 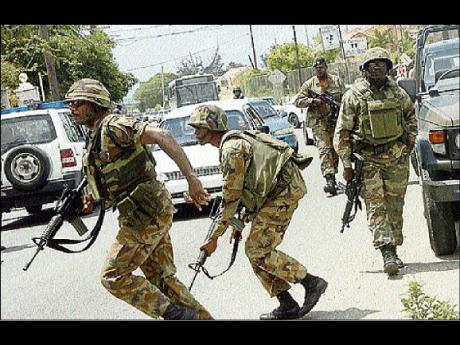 Soldiers on operation in Kingston.

AS THE murder rate gallops at a frightening pace in Jamaica at least one health professional has turned the spotlight on a major environmental hazard which overseas research has shown may be a contributory factor to violent crimes and murder.

Christine Forrester-Gill, a health professional, has argued that the high crime rate in Jamaica has for too long been erroneously blamed on many social factors.

Drawing on research carried out by Dr Herbert Needleman, a medical pioneer in the United States, Dr Forrester-Gill says the exposure to lead may be one of the most significant causes of violent crime in young people.

"It is clear that a lead contamination problem exists in pockets of Jamaica. But how research correlating lead poisoning to impulsivity, violence, homicide and criminality applies to Jamaica is just a matter of connecting the risk factors to reality,"

Lead poisoning is not new to Jamaica. This hazardous material has affected hundreds of children in communities such as Kintyre, Mona Commons, Marverly in St Andrew, Red Pond in St Catherine and other locations in Kingston and St Catherine where illegal smeltering operations are flourishing. These communities have been plagued by incidents of violence over many years.

But, while efforts have been made by the International Centre for Nuclear Sciences (ICENS) at the University of the West Indies to battle the toxic environmental issue, there remain concerns about its present and long-term effects.

Dr Needleman, a paediatrician, researcher and professor at the University of Pittsburgh, conducted studies on the neurodevelopmental damage caused by lead poisoning.

He concludes that when environmental lead finds its way into the developing brain, it disturbs mechanisms responsible for the regulation of impulse. This, according to Needleman, could ultimately lead to anti-social and criminal behaviour.

Research has also shown that exposure to lead at a tender age may result in decreased intelligence quotient (IQ), delinquency and increased aggression.

"There is a critical part in a child's life from it is in the womb to about two years, where lead can really have a bad influence on children, it can vary from killing them to ruining their educational capabilities," Professor Lalor points out.

However, despite the absence of scientific research in Jamaica directly linking lead poisoning to violent behaviour, Dr Forrester-Gill is adamant that Jamaica's alarming crime figures are due, in part, to the effects of the toxin.

For years, ICENS has played a central role in conducting research on lead poisoning in children locally.

Lalor points out that ICENS has assisted in the testing of children for lead through collaboration with some paediatricians.

However, The Gleaner has been informed that public hospitals in Jamaica are not equipped with the technology to carry out blood tests for lead.

Efforts were made to get a comment from Chief Medical Officer (CMO) in the Ministry of Health, Dr Shiela Forrester-Campbell, but our call was not returned.

Jamaican Government has removed lead from gasolene, one of the major sources of lead poisoning for children.

While the phasing out of lead in gasolene in Jamaica is considered a significant achievement, Dr Forrester-Gill says motor vehicle batteries still pose a serious threat, particularly to children. She says an estimated 500,000 batteries are used each year in the motor vehicle industry locally.

The health professional is worried that many battery shops in urban residential areas may be causing irreparable damage to children.

"I like to appeal to the regular people. You try to see if you can get your children's blood tested," she advises.

Dr Forrester-Gill contends that Jamaica is a signatory to international treaties that guarantee safe spaces for children to exist.

"We are supposed to be able to sue somebody if they cause their waste, their rubbish to cause our children to become lead poisoned.

"We are supposed to be using our doctors and attorneys to document some of these things so that people can use this information and fight the state to protect us," she stresses.

More than a decade ago, ICENS discovered that the Kintyre Basic School in St Andrew was sited on a lead-refining plant.

Professor Lalor said more than 60 children from that community were exposed and had to be treated for lead poisoning.

He says adults from Red Pond in St Catherine are still suffering from the effects of lead poisoning.

Professor Lalor explains that ICENS is not a public health group and does not have adequate human resources to do checks across the country for lead. The ICENS head is hoping the Ministry of Health will carry out this exercise.