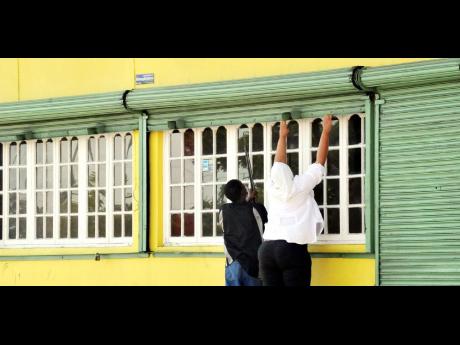 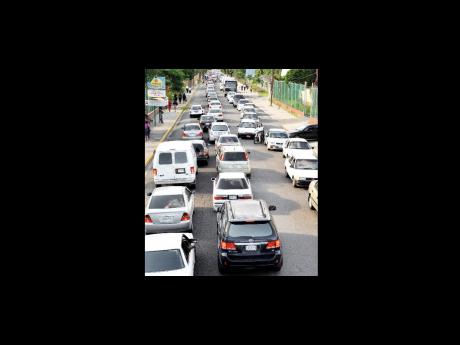 Traffic came to a standstill along Marescaux Road in Kingston yesterday afternoon as most business places closed their doors early. - photos by Norman Grindley/Chief Photographer
1
2

The busy commercial centre of downtown Kingston yesterday afternoon emptied faster than you could say 'Dudus', as word spread that the Government had signed the extradition request from the United States.

'Dudus' is the moniker for West Kingston strongman Christopher Coke, who is wanted in the United States on drug and gun charges.

Business operators on King, Orange and Princess streets quickly pulled down their shutters and ushered their workers home, as more and more persons whispered that gunmen had taken to the streets to protest against the decision to extradite Dudus to the US.

From as early as 3 p.m., stores, started closing their doors and streetside vendors started packing up their goods, fear clearly etched on their faces.

Terrified shoppers and employees of the many businesses rushed into any bus or taxi they could find, with persons creating bus stops where none existed.

On the streets, persons told our news team that sporadic gunfire had been heard in the area, while roads were blocked in the vicinity of Tivoli Gardens, the base of the West Kingston strongman.

But this was quickly proven to be untrue as our news team travelled along Spanish Town Road, Industrial Terrace and other areas around Tivoli, where businesses were operating as usual, with traffic flowing freely.

That was a contrast to areas, such as Duke Street, Heroes Circle and North Street, where there was bumper-to-bumper traffic from before 4 p.m.

With the police rushing into the area in their numbers, a couple of bars remained open, but that was not enough to convince most persons to remain, as they made their way out of the usually busy area.

"The Police High Command is advising the public that (it is) not aware of any threats at this time and that the crime-security situation in the country is being assessed on a continuous basis," said Karl Angell, information officer for the police force.

"We are appealing to all to remain calm and not to circulate false information capable of generating panic, but to call Police Control at 119, or senior duty officers at 978-6462 and 927-7778 to report any such concerns or related information coming to their notice," Angell added, as he sought to assure Jamaicans that the police were on top of the situation.

"We wish to reassure the public that our officers have been deployed and instructed to report all safety and security-related concerns for action, as well as to respond quickly and appropriately to public calls for assistance," Angell said.

That came as reports spread that some businesses had also closed their doors in Spanish Town, St Catherine.