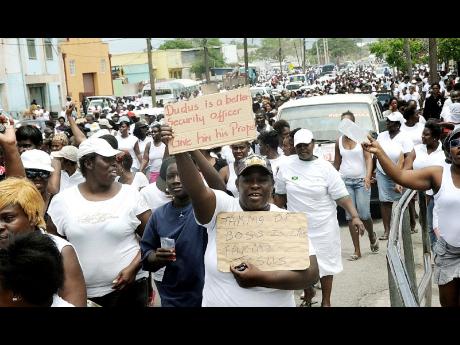 A supporter of Christopher 'Dudus' Coke holds a placard high as hundreds of demonstrators march along Spanish Town Road yesterday to demand that his extradition hearing be scrapped. - Ian Allen/Photographer

The protesters, mainly women and children dressed in white, started their demonstration at the intersection of Industrial Terrace and Spanish Town Road just after 8 yesterday morning.

Initially, they concentrated on the reports by the police that they were being forced to stay at home and that their cellular phones had been confiscated by thugs backing Dudus.

"Dem a talk about our phones take away and if we leave we can't come back and that is a lie," declared one angry protester.

"Anybody can come into Tivoli and see the situation. We can go and come as we want, we can walk peacefully and see mi phone here," the woman added.

Her friend rushed to address the Gleaner team as she blasted the police for their claims.

"We a no hostage, a lie the police a tell because them no like the 'Big Man'. We happy and them fi leave we alone," the scantily clad woman said.

But the focus of the protesters quickly changed as they voiced their opposition to any plan to extradite the man they call 'The President'.

"No Dudus, no Jamaica. Dudus a feed the whole a wi and them fi leave him. The police them always have problems with the Coke dem. If you have a pickney now and him name Coke, by the time him reach 20-year-old them a go accuse him," another protester charged.

"Portia must tell we if the PNP did extradite Anthony Brown and George Flash when them did wanted. How them did have them man deh free and now them want fi extradite Dudus. A just politics them a play," one woman said, referring to two men who topped the police most-wanted list in the 1970s and '80s.

"Dudus tell we fi wear white today and not green because this is not about politics, and the PNP, dem a play politics and Dudus only want peace," another protester said. Green is the colour of the Jamaica Labour Party which the residents of Tivoli support.

With a strong police presence and marshals from the community ensuring that persons did not block Spanish Town Road, the protesters chanted loudly for more than two hours before a shout from one of their leaders saw them heading across Spanish Town Road into the heart of downtown Kingston.

Around St William Grant Park and across East Queen Street went the crowd which was growing by the minute.

Then came the shout "mek wi march to Gleaner", signalling a sharp left turn on to Duke Street towards the North Street offices of The Gleaner Company.

But by then, the police had had enough and after allowing the demonstrators free rein through the heart of the commercial centre, the cops used their vehicles to form a line on Duke Street in the vicinity of the country's Parliament building, Gordon House.

A single explosion from a policeman's gun was enough to convince the protesters that the cops were serious and that it was time to head along Beeston Street down North Street and back into Tivoli Gardens.