All out war - As Tivoli assault deepens, casualties rise 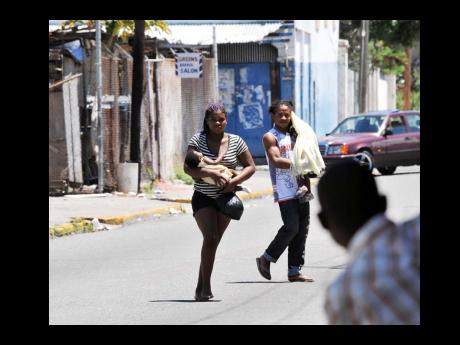 A man and a woman with babies scamper after getting caught in a crossfire between gunmen and the police at the intersection of East and East Queen streets in downtown Kingston yesterday. 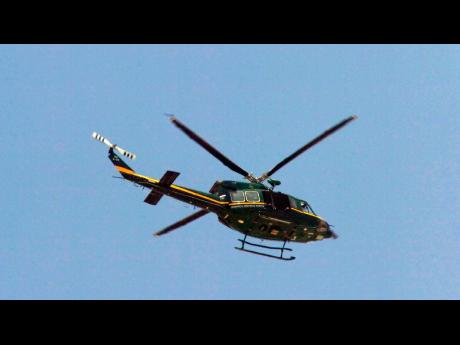 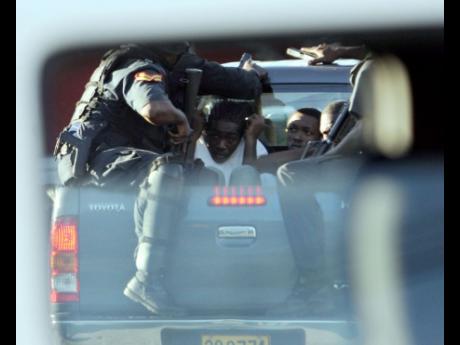 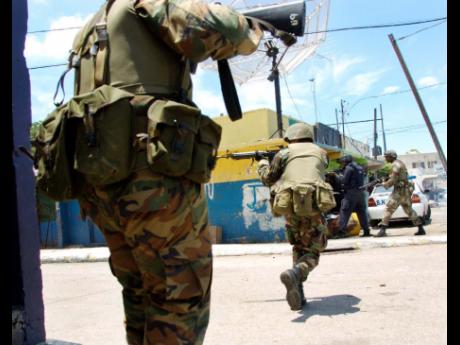 Soldiers race across Park Lane - an enclave where gunmen are holed up - to give support to policemen during a firefight in the Red Hills Road area of St Andrew yesterday.
1
2
3
4

Soldiers and police yesterday launched a bloody offensive on Tivoli Gardens where heavily armed thugs barricaded themselves to protect the mini-republic of a reputed crime overlord, causing street battles to ripple across Jamaica's capital.

At least three members of the security forces have been slain in gunfights and 14 others injured in two days of wide-scale violence that has swept western Kingston and other areas where rogue alliances exist.

Up to press time last night, the Constabulary Communication Network reported that seven law-enforcement personnel were injured in the latest phase of operations. Six of the seven were shot, one succumbing to his injuries. That fatality was a Jamaica Defence Force (JDF) soldier.

One soldier was reportedly injured in an undeclared accident. A soldier reportedly lost a leg, The Gleaner also learnt.

An undetermined number of civilians have been killed, with many of those believed to be among the gunmen who had engaged the security forces in fierce gun battles.

A source at Kingston Public Hospital said 23 persons had been admitted with gunshot wounds and three bodies delivered. A soldier told The Gleaner last night that many bodies were in Tivoli.

Hundreds of lawmen were yesterday hunting alleged drug kingpin Christopher 'Dudus' Coke, who is wanted in the United States to answer to drug and gun charges. There have no reports whether Coke was nabbed or killed in the assault.

The security forces decided yesterday that the time to appeal to Coke supporters to clear the many barricades they had erected had expired.

But the armed thugs were not prepared to surrender, and police and soldiers had to take back the streets - barricade by barricade, block by block.

For most of the day, the sound of gunfire echoed across the south-eastern city where commercial activity had come to a standstill.

'Ground zero' was the area around Tivoli Gardens stretching from Darling Street in the east, Industrial Terrace in the west,

Spanish Town Road to the north and Marcus Garvey Drive in the south.

But other areas, including the Fletcher's Land neighbourhood beside The Gleaner's North Street offices, Denham Town, East Queen Street in the vicinity of the Central Police Station, and sections of Hannah Town also saw major gun battles.

The writing was on the wall from early yesterday morning when sources in the security forces told The Gleaner that the time for talk was over and efforts would be made to take back the streets.

By mid-morning when gunmen attempted to storm the Central Police Station, the order was issued for the police and soldiers to use deadly force to repel the criminals.

A short while later, a massive deployment from the JDF was seen on Harbour Street with soldiers taking up strategic positions.

"Time to take back the streets," said a motorist as he drove past the JDF team. And that was obviously the intention of the security forces.

Persons ran for cover - even those several metres away - as the sound of high-powered weapons rocked buildings in west Kingston.

The police and soldiers sealed the entrances and exits to Tivoli Gardens, Denham Town and Hannah Town, barring all non-essential personnel.

Even members of the media were firmly and politely told that they would not be allowed on to the battlefield.

From every possible vantage point, reporters struggled to get a peek at the firefight but most had to make do with a look at the thick, black smoke which billowed from inside the battleground - reportedly from the Coronation Market which had been set ablaze by gangsters.

Dwellings on Crooks Street and in Whitfield Town in the western end of the city were also razed.

Three persons were injured in the fire that destroyed two dwellings at Whitfield Town. No one sustained fire-related injuries at Crooks Street while the firefighters were unable to respond to the blaze at Coronation Market - Jamaica's main market - because of the wicked stand-off in the area.

But even those journalists several metres away at the intersection of Waltham Park and Spanish Town roads came face to face with the violence as random bullets struck at least one spectator.

Persons watching the drama from the neighbouring community of Rema also had to duck for cover as bullets whizzed by. Two bystanders were reportedly shot in the area.

As darkness descended over Jamaica's capital city, explosions were still being heard, sparking fears that the body count could be much higher when the tallying begins this morning.