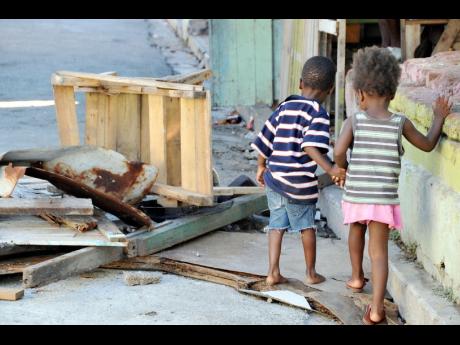 A little boy holds his sister's hand as they navigate around a road block on Mark Lane in Kingston yesterday. Children's advocate Mary Clarke has urged parents to protect their kids.

Residents of Tivoli Gardens took to the airwaves appealing for help yesterday afternoon as the security forces moved determinedly to take back the streets from thugs who had established defence positions across west Kingston for almost one week.

With the Jamaica Defence Force leading the push into the barricaded community, residents claimed that excessive force was being used against all and sundry.

"A nuff shot dem a fire and all bomb a drop from helicopter," said one caller to our news centre.

"Me hear say me daughter-in-law dead and all people house bomb down. Dem a go kill we off in yah and decent people live yah," another woman said, in tears.

"Where is the prime minister? Him is we member of parliament and now that them a kill we, him not here. When them want votes, them come down here come party, but now that the police dem a kill we, nobody not here.

The police had repeatedly appealed to women and children in Tivoli Gardens to leave the community as it became clear that militants were determined not to remove the blockades they had mounted.

On Sunday, as the criminals reinforced the blockades and attacked four police stations, the cops provided buses to transport women and children from Tivoli Gardens and Denham Town but residents told The Gleaner that they were unable to leave.

Some persons claimed that if they left, they would not be able to return to their community. Others pointed to the danger they would be exposed to if they were to attempt the more than 400-metre trek along Industrial Terrace to get to the buses.

Up to press time, the security forces did not reveal how many civilians - including insurgents - had been killed in Tivoli Gardens.