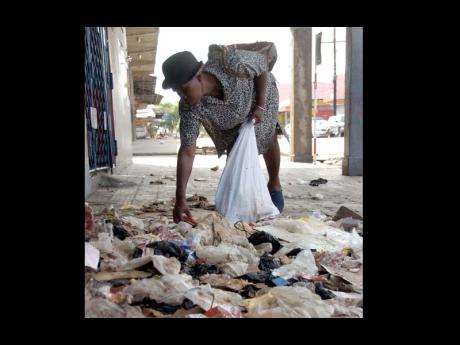 A woman searches through items yesterday at the entrance to a wholesale store located at the intersection of West and East Queen streets which was looted as downtown Kingston was rocked by gun battles between gangsters and the security forces. - Ricardo Makyn/Staff Photographer 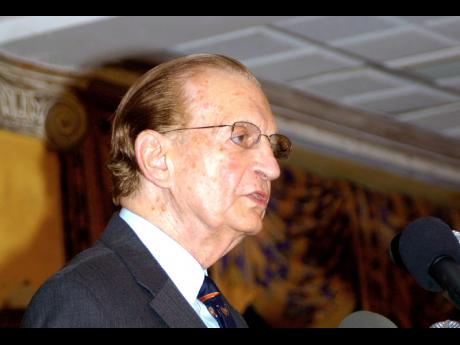 Former Prime Minister Edward Seaga criticised the Government yesterday for betraying its vow to protect residents of embattled Tivoli Gardens, arguing that the assault by the security forces had caused widespread suffering for the most vulnerable.

Seaga, the former member of parliament for West Kingston who has been praised as the ideological architect of Tivoli Gardens, demanded that the lockdown be lifted to grant trapped residents access to food and medication.

"I am absolutely not happy. This is not what the minister of national security promised. He promised the people that they would not be harmed, and now they are fearful and starving for food and drink," he told The Gleaner yesterday.

"The Government should lift the embargo they have over the area and allow the people to leave to look for food and drink," he continued.

Seaga, who represented the West Kingston constituency - in which Tivoli Gardens is located - for more than 40 years, said he had been receiving calls from his former constituents about their ordeal.

"People have been calling for food and water, that they are not allowed to leave, and that they are penned in. It is a desperate situation and they are calling me. But I am powerless. I tell them to contact their member of parliament (Bruce Golding)," he said.

The army and the police attacked gunmen who had barricaded Tivoli to prevent them from arresting suspected drug lord Christopher 'Dudus' Coke.

Seaga was the leader of the Jamaica Labour Party (JLP) for more than 30 years and was replaced in 2005 by Golding, the current prime minister, who represents Tivoli Gardens in Parliament.

Seaga, who is still involved in the affairs of Tivoli Gardens through his chairmanship of its football team, said the ongoing offensive echoed the July 2001 security operation, which claimed more than two dozen lives.

Seaga had criticised Adams' operation as "an atrocity of the worst order".

The ex-prime minister also rejected claims that he was responsible for Tivoli Gardens morphing into what former army chief Rear Admiral Hardley Lewin described as "the mother of all garrisons". Tivoli has been labelled an untouchable crime den from which gangsters have extorted businesses, peddled drugs and killed mercilessly.

Said Seaga of that assessment: "The work that I put in was not to create any community of that sort. What I wanted to do was to create a model community, including all the social amenities you would want. These included a maternity centre, a basic school and a primary school. This is what I created."

Seaga, who is a distinguished fellow of the University of the West Indies, said the genesis of Tivoli's notoriety lay in its resistance to strongmen from adjoining areas who felt it might sway People's National Party supporters to switch to the JLP.

He said Tivoli Gardens residents had been forced to defend themselves in the past.

When asked if he had received any information about the whereabouts of Coke, the subject of the operation, Seaga said, "I haven't got a clue. Mr Coke is not my concern. My concern is the people."