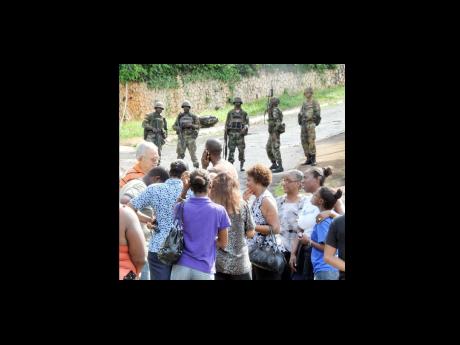 A band of soldiers blocking access to the East Kirkland Heights death house as residents look on. - Norman Grindley/Chief Photographer

THE TRAIL of blood that has marked attempts to arrest accused drug baron Christopher 'Dudus' Coke lengthened yesterday with yet another civilian casualty as the security forces came up empty-handed after a fierce firefight in an upscale St Andrew community.

The Clarke family said last night that they were "horrified and shocked by the dangerous, unprofessional and outrageous conduct of the security forces ... who forcibly invaded his home and killed him in front of his wife and daughter".

They have demanded a "complete, full and thorough investigation" into the matter.

Acting Deputy Commissioner of Police Glenmore Hinds, who heads the operation, said the operation was part of an islandwide effort to apprehend Coke.

According to Hinds, in addition to Clarke, four Jamaica Defence Force (JDF) soldiers were left nursing gunshot wounds during the confrontation between the soldiers and gunmen.

Speaking at a press conference at the Hilton Kingston hotel in New Kingston yesterday afternoon, Hinds said one firearm was recovered in the operation.

With helicopter support, the soldiers stormed the upscale premises and were fired on.

The loud explosions rocked the usually quiet suburban community, causing residents, many metres away, to duck for cover.

According to the residents, shortly after 2 a.m., their night's rest was disturbed by the sound of a low-flying helicopter.

The residents said this was quickly followed by loud explosions and bright lights across the sky.

"Then a just pure (many) gunshots, for about 20 to 30 minutes, and me hear nuff heavy-duty weapons a fire," one resident, who requested anonymity, told The Gleaner.

She said that after a lull, when the only sound heard was of raindrops on the roof, the gunfire resumed.

"There was another barrage and then there was sporadic shooting for the next two hours," the resident said.

She said the gunfire appeared to be coming from different directions and sounded as those firing were moving.

It is not clear how the shooting moved from the initial premises to two neighbouring properties or how Clarke was killed.

"The matter is now the subject of an investigation by the Bureau of Special Investigations and I am constrained to say nothing more at this time," Hinds said.

The security forces have been trying to apprehend Coke since Monday when he ignored an appeal to turn himself in.

Coke, the reported head of the Shower Posse which has tentacular links in Jamaica, the United States, Britain, Canada and Caribbean, is wanted by American authorities to answer gun and drug charges.

The hunt for Coke started in Tivoli Gardens before moving to Coke's home in Plantation Heights, St Andrew, and another residence in Greater Portmore, St Catherine.

It has already led to the death of at least 73 civilians, including some believed to have engaged the security forces in gun battles in Tivoli Gardens and Denham Town earlier this week.

Meanwhile, the Police High Command issued an appeal yesterday evening for 13 men it describes as gang members or leaders to turn themselves in.

This is the second time in three days that the police are issuing an appeal for wanted men to turn themselves in. Following the first appeal, 12 men turned themselves in.