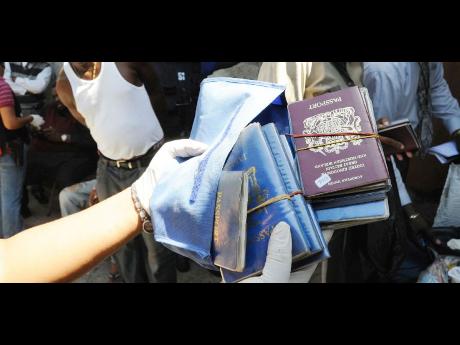 Police display some of the hundreds of passports seized in the bust of a visa racket at John's Lane yesterday. One man was arrested. - Rudolph Brown/Photographer

Hundreds of passports were seized and one man taken into custody when the police raided an illegal visa operation at John's Lane, downtown Kingston, yesterday.

Police from the Flying Squad, led by Superintendent Cornwall 'Bigga' Ford, raided the modest property at 64 John's Lane where they found passports hidden in the roof, floor and other areas.

Several fake stamps, including those used by justices of the peace, were also found hidden in the building.

The police also seized a motor car - parked outside the building - which residents claimed was owned by a female district constable related to the man who was detained.