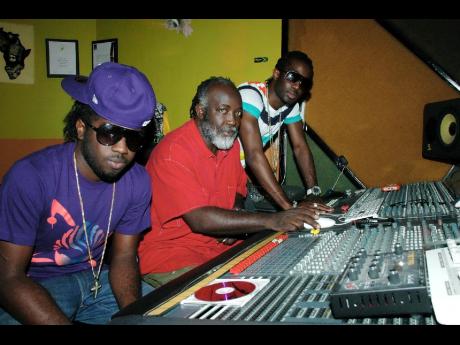 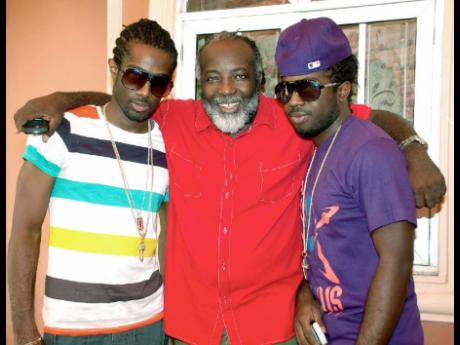 Even though his boys Daniel 'Chino' (left) and Stephen 'Di Genius' McGregor (right) are grown and are enjoying their individual careers, Freddie McGregor is still the father who while not dictating, gives his sons sound and valuable advice. - colin hamilton/freelance photographer
1
2

The Big Ship is sailing full speed ahead under the captaincy of renowned reggae singer Freddie McGregor and his sons, dancehall artiste, Daniel ('Chino') and star producer, Stephen ('Di Genius'). Not realising that his decision to open his own production house would be a strong factor in the development of his sons' musical talents and ambitions, McGregor established Big Ship Records in 1989. Today, it has benefited him and his offspring, who both enjoy separate successful musical careers.

"At the time I started Big Ship, it was either building my own studio or signing to Arista Records. I chose to start my own thing," says McGregor.

Since his children were even more exposed to music after he set up his studio, perhaps it was inevitable that one day the McGregor boys would take a spot in the industry. From their days of hanging out and messing around in the studio and being taken on tours, the youngsters were unknowingly being groomed.

"Stephen loved the studio from he was knee-high. I used to take them on tours with me and they would watch me work from the side of the stage. So, from those times, they were getting the experience and were getting more accustomed," says McGregor.

It was Chino, though, who developed more of a liking for recording. In 1999, while attending Wolmer's Boys School, he recorded and released his first hit single and as they say, the rest is history.

"I always had a love for music, and the environment I grew up in played a part as well," asserts the 27-year-old.

Over time, his confidence and passion grew and now he has rightfully taken on the awaiting spotlight and stage. Being the son of a popular and well respected musician, Chino has his own style and quickly points out that he in no way copies his father.

"I have my own style and flavour and I bridge generations through my style of music," he says.

Stephen, the younger son, started his music career at a young age like his father.

"I started messing around at the age of five. But, professionally, I started producing at 11 and it was at that point I realised I could make it into a career." Starting out as a hobby, Stephen would go into his father's studio to experiment, copying already established tracks he would hear, and subsequently creating his own. Being behind the scenes suited Stephen.

"Because of my personality, I was most comfortable with being in the studio and producing," he said.

The McGregor boys, though pursuing individual careers, have banked on their father's experience and knowledge. For both, one of the most important pieces of advice they have received from their father is professionalism. According to the two, even though they may possess a laid-back attitude, professionalism is high priority.

"We learnt that music is a business. While you may be having fun doing it, you still have to remain focused and approach it in a businesslike manner," says Stephen.

As for the perks that come with being the offspring of Freddie McGregor, the two say they have gained a level of respect from many, thanks to their father. They also note that people are quick to give them a listening ear and will gravitate towards their work as they expect a high standard. But like most things, there are disadvantages.

"The stereotype is there that we have it easy and for that, they will want to give you a hard time," Chino expresses.

Like a proud father, Freddie McGregor speaks highly of his sons. He says while he did not force them to make music their career, he said it was their exposure to the music world which helped them to hone their skills.

"They are brilliant enough to make their own decisions. Chino and Stephen have been in training and it was just a matter of time. I, however, just gave them the guidance, nothing was forced on them."

He implores fathers to pay attention to their children.

"It is important to pay attention to their passion because you never know what can happen. Make the necessary preparations for them to achieve their dreams and just be there to give them the proper advice and guidance." Additionally, he said it is an advantage to understand what they love the most and provide what is best for them to achieve success.

A family unit and a musical team, when the McGregors hit the stage it is like magic.

"I give thanks for the blessings because there is no guarantee. It is a magical feeling when we all perform together, we know what to do when we hit the stage," said the doting dad. And speaking about an entire family of musicians, the father also glows about the superb talent of his daughter Shema who has a singing career.

In keeping with his belief that experience teaches wisdom, the father tries not to impose on his children's career.

"I let them be creative; however, if there is a particular lyrical content that I think may affect them later down the road, then I will give my opinion. Generally, though, I focus on the business side."

Coming up this summer, the McGregors will be featured as special guests at one of Japan's biggest festivals. There will also be album releases this year, including one from Chino this summer.