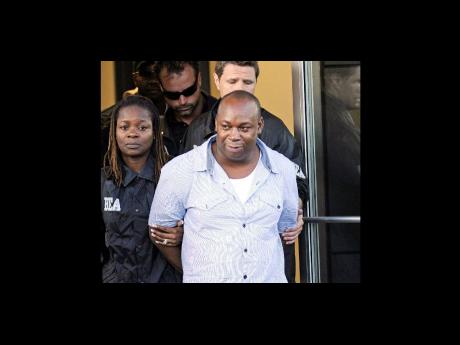 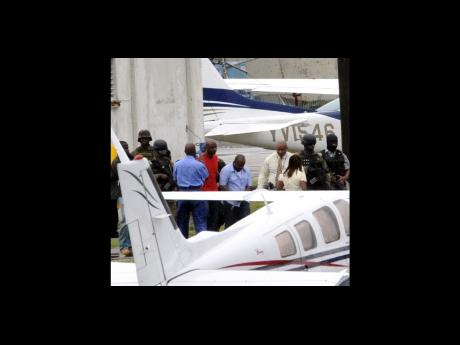 Coke is escorted by law-enforcement agents towards a plane at the Norman Manley International Airport, moments before flying to the United States. - Norman Grindley/Chief Photographer 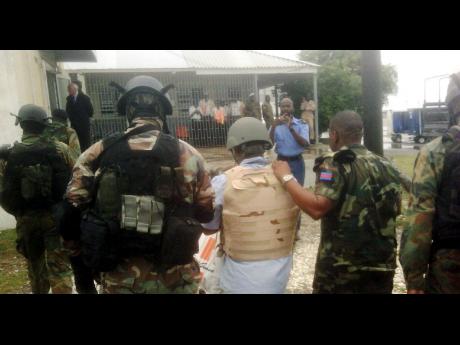 Christopher Coke is led to court by soldiers at the police Mobile Reserve headquarters in Kingston. - Contributed 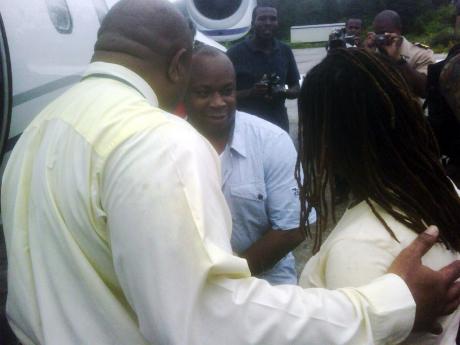 Christopher Coke speaks with Drug Enforcement Administration personnel at Kingston's Norman Manley Airport before being jetted away to the US. - Norman Grindley/Chief Photographer 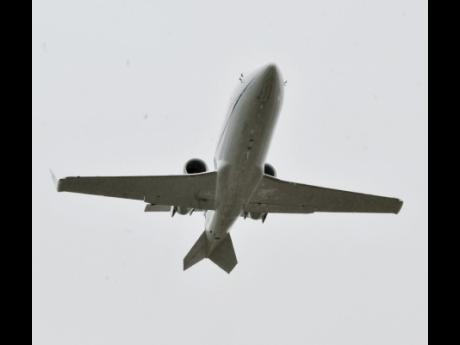 The 41-year-old arrived shortly after 6 p.m. (Jamaica time) at Westchester County Airport in White Plains, New York, and was taken to a federal lock-up.

The strongman, who was captured by the police on Tuesday, was whisked out of Jamaica by plane at 2:05 p.m. yesterday, four hours after he waived his right to an extradition hearing.

Coke was taken by heavily armed security personnel to the Norman Manley International Airport and placed in the custody of US Marshals who were waiting to escort him on to an unmarked aircraft.

The quickly organised departure of the man who was, up to a month ago, considered the most feared person in Jamaica brought an anti-climactic end to the mayhem that accompanied the extradition request from the United States in the summer of 2009.

Minutes after Coke signed the consent documents - indicating that he would not challenge his extradition - he was hit with a restraining order, freezing all his assets.

There was nothing defiant about Dudus' demeanour throughout the course of yesterday's historic proceedings.

Later, Coke assured a probing Resident Magistrate (RM) Georgianna Fraser that he was fully aware of the ramifications of his decision.

After eluding the police for a month, the dragnet descended on Coke in less-than-spectacular fashion than the deadly gun battle that triggered a state of emergency in late May.

The dramatic challenge to the attempts of security personnel to apprehend Coke last month was absent yesterday, although the armed forces took no chances.

Gone was the bravado of Tivoli Gardens residents who demonstrated in support of Coke before barricading themselves into the community.

Vigilant policemen and soldiers searched vehicles on Industrial Terrace in that community during a consistent drizzle, as the time drew near for Coke to make his appearance in court.

The sound of a Jamaica Defence Force helicopter droned on and on as it hovered, while on the ground, security personnel cordoned the precincts of Up Park Camp and the Mobile Reserve.

Dudus seemed calm, oblivious to the buzz around him as he entered the court flanked by soldiers, but minus his attorneys, minutes before the scheduled start of the 10 o'clock hearing.

Attired in blue, striped shirt, guards towering over the 5' 4" captive who also bears the moniker 'Short Man', Dudus glanced around, before briefly nodding in acknowledgement of journalists.

Director of Public Prosecutions (DPP) Paula Llewellyn told RM Fraser, who presided over the hearing, that Coke's attorney had not yet reached court.

Fraser inquired of Coke who was his lawyer, to which Coke politely responded, "George Soutar."

As if on cue, Soutar entered the room with Tom Tavares-Finson, another attorney, in tow.

Soutar announced that Dudus had expressed a desire to waive his right to a local court hearing, before reading from a prepared text he attributed to Coke.

The attorney told the court that Coke said he had made the decision of his own free will even though he believed his case could have been successfully argued in the courts of Jamaica.

"I take this decision for I now believe it to be in the best interest of my family, the community of western Kingston and, in particular, the people of Tivoli Gardens and, above all, Jamaica," said Coke's statement.

Coke acknowledged that the entire country had been adversely affected by the bloodshed related to his extradition.

He said he hoped that his decision yesterday would help to heal the community of Tivoli Gardens, which the army stormed to uproot a militia, resulting in the deaths of one soldier and 73 civilians.

Tavares-Finson expressed appreciation on Coke's behalf yesterday for the professional treatment he received while in custody.

Tavares-Finson commented that even the court was being fair to Coke, eliciting a brief smile from the resident magistrate.