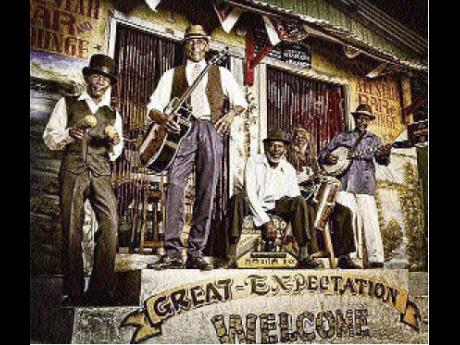 Mento, in its original format, is 'country people music', the banjo, maracas and rhumba box needing no electronic amplification to carry home in rural areas of a country where there is still need for a rural electrification programme.

Somewhere along the timeline of Jamaica's popular musical development, though, it became relegated to 'tourist music', the floral-shirt-clad figures beaming under straw hats and warbling Yellow Bird a far cry from and sad caricature of irreverent, bawdy, witty and extemporaneous mento.

Jon Baker, in his original format, is an English lad who went to New York, got a look at black urban music before it went mainstream, ended up forming Gee Street Records and built the world-class Geejam Studios in Portland.

Now mento meets an ultra-enthusiastic Baker and there is Great Expectation of The Jolly Boys album of that name, which they will give St Andrew a live listen to at Redbones Blues Café on Saturday night before heading off on a one-month tour of the United Kingdom, the touring party consisting of three original members and a number of 'new' Jolly Boys.

There is a video for the lead-off song, a cover of Amy Winehouse's Rehab, in which a short red-dress-clad young lady undulates to the music, making for a connection among generations across the divide since mento fell out of radio and sound-system favour.

Among the other tracks of Great Expectation are Perfect Day, Riders on the Storm, Golden Brown, I Fought the Law, Ring of Fire and You Can't Always Get What You Want.

At a not-too-difficult stretch, there are similarities between the 12-track project, dubbed 'contemporary mento', and the nascent days of the Jamaican recording industry. In The Rough Guide to Reggae, Steven Barrow and Peter Dalton write that when Stanley Motta opened Jamaica's first recording studio on Hanover Street in 1951, "his plan seems to have been to record mento". And "the first disc actually issued by Motta was a medley of mento songs by Lord Fly". So, while mento and The Jolly Boys are not new to the studio, the Gee Jam standard and the cadre of top-flight personnel Baker has employed (Great Expectation was mixed by Tim Amilherst) is a whole new world.

With the agile senior Albert Minott (an engaging character, face lined with experience and humour, front upper teeth a casualty of his fire-breathing days and who can walk on his hands even on the upper side of 70 years old) up front, The Jolly Boys had literally been under Baker's music trend-sniffing nose in Portland for a while. However, at Christmas 2008, while watching them at the Bush Bar along with a  record-producing colleague "I noticed some of the guys were no longer coming to play. I thought to myself that not a lot of music gets to be recorded in Gee Jam," he said, so he pulled in The Jolly Boys.

Still, he says, "I had never explored mento in-depth," although he soon realised that mento was "a very important social kind of music". Having The Jolly Boys in the top-flight studio also made him realise that Minott was "an incredibly charismatic vocalist".

After recording a number of traditional mento songs (The Jolly Boys sing Iron Bar in one of the promotional videos behind Great Expectation), Baker says he spoke with partner on the project Mark Jones, asking, "wouldn't it be incredible if we tried to marry the institution of mento with modern pop and rock songs?"

Baker points to the similarities in irreverence and double meaning between mento and the "right and relevant" songs chosen for the project, then laughs as he says, "they are among my favourite all-time classics." It also does not hurt that Winehouse recorded at Geejam this year.

And he is not smiling when he says "there is a cultural side to the mento movement that exists in rock and roll".

Dale Virgo, co-producer of Great Expectation, is a key player in the contemporary mento sound in the studio and live with the band, while Dan Neely also handles dual roles. The academic, who researches mento and is critical to "making sure we get everything right" as music director, also plays banjo.

Still, despite the lack of straw hats and floral shirts, it is hard to divorce mento from foreigners interested in Jamaica. "People want to hear positive news about Jamaica. It is not that we are unpopular around the world," Baker said, noting that a number of top journalists will be coming "to Kingston - the place no one wants to go to".

"This is not as much a studio album now as a live show," Baker said. The Jolly Boys will play two sets, one with the traditional and the other the contemporary mento on Great Expectation.

The title came from the reaction of those who were told about the project, but in a click of photographic serendipity, that is just what is written on the building against which The Jolly Boys are framed.

As Baker had told The Sunday Gleaner, "it is almost as if the planets were aligned for this album to happen."