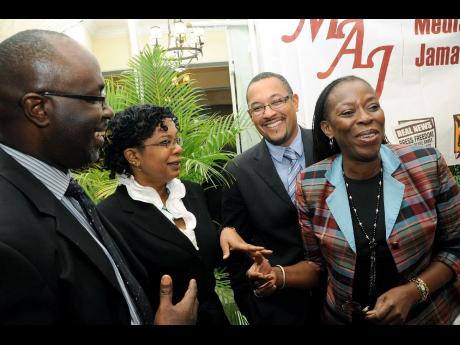 (From left) Gary Allen, chairman of the Media Association Jamaica (MAJ), shares a joke with Kathy Ann Waterman, senior state counsel, Office of the Director of Public Prosecutions of Trinidad and Tobago; Christopher Barnes, executive member of the MAJ; and Christine King, secretary of the MAJ. Waterman was the guest speaker at yesterday's breakfast seminar on Jamaica's defamation laws, hosted by the MAJ at the Terra Nova All Suite Hotel in St Andrew. - Rudolph Brown/Photographer

SENIOR LEGAL counsel in Trinidad and Tobago, Kathy Ann Waterman, wants criminal libel to be repealed in Jamaica and the rest of the Caribbean, arguing that it has no place in modern jurisprudence.

At the same time, chairman of the Media Association Jamaica Ltd (MAJ), Gary Allen, has questioned whether the parliamentary deliberations of a joint select committee reviewing the libel laws had stalled.

Addressing an MAJ breakfast seminar yesterday at the Terra Nova All Suite Hotel in St Andrew, Waterman noted that England and Wales, in recent times, had removed antiquated provisions from their laws.

She contended that Commonwealth states which were averse to relinquishing criminal libel law could no longer rely on the argument that it formed part of English legislation.

Under the current defamation laws in Jamaica, a journalist can be imprisoned if a case brought against him results in a conviction.

The Trinidadian attorney is also batting for a reduction in the period for which defamation action can be brought against a media entity. The current timeline extends to six years, but Waterman is proposing a maximum of two years.

One of the recommendations of the Justice Hugh Small committee, appointed by Prime Minister Bruce Golding to review the defamation laws, was for provisions to be introduced to confine the jury's role to determining the matter of libel, but not to prescribe damages. The committee suggested that a judge should be given the power to assess the amount of compensation to be awarded.

Earlier during the seminar, Allen expressed dissatisfaction with the snail's pace of the joint select committee reviewing the libel laws.

The committee, which is chaired by Justice Minister Dorothy Lightbourne, had its last meeting in July 2009.

Allen indicated that Golding had given the assurance that Parliament's review of the defamation laws would be dealt with early in the new legislative year.