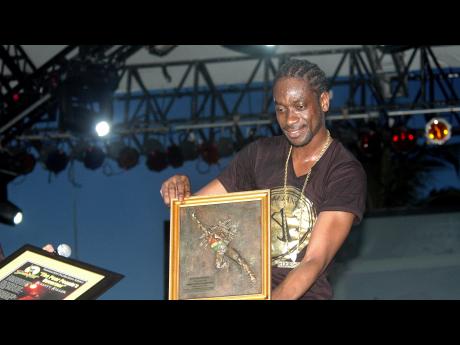 Rodney 'Bounty Killer' Pryce displays his award at the Sumfest show at Catherine Hall in Montego Bay on Thursday, which was designated Dancehall Night. The organisers of the event gave Pryce the award for his contribution to Reggae Sumfest. - Photo by adrian frater

CLASSIFYING 'SHOTTAS' as "waste sperm", the man tagged 'Five Star General', Rodney 'Bounty Killer' Pryce, said it was time for the Government to replace dons, commence the fight against poverty, and leave the police to carry out the job of crime fighting.

A seemingly new and mature Pryce, in a militant and philosophical performance, surprised the thousands who turned out for Dancehall Night at Reggae Sumfest on Thursday when he openly supported the security forces and called on the Government to act now, with the state of emergency out of the way.

"We now need a 'state of urgency'," he asserted, adding that it should be geared towards correcting the ills that had been meted out to the people of Jamaica by successive governments.

"Poor people fed up," he stated, making reference to his 1999 hit song of the same name, while using his 45-minute stint to call on the other artistes at the Catherine Hall, Montego Bay, complex to collaborate in restoring peace to the country.

The DJ, dubbed 'Warlord', is known for belting out unbridled gun lyrics.

But as he preached and taught from his pulpit - the stage - Pryce, who says he is now being managed by his mother, encouraged the people in the audience to show love by holding the hand of the person next to them. His words of encouragement were met with loud cheers.

Pryce was later honoured by Summerfest Productions, organisers of the event, for his outstanding contribution to reggae music and in particular, Reggae Sumfest.