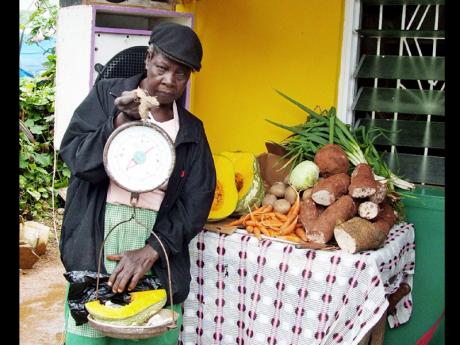 UNDER PRESSURE to rev up the agricultural sector, many industry players are begging for a respite similar to what the state of emergency seems to have achieved in the fight against crime.

While accounting for almost six per cent of Jamaica’s gross domestic product and providing direct employment for some 228,000 Jamaicans, the agricultural sector continues to underperform, facing as it does, significant challenges.

The limited access to financing, the high cost of capital, soaring labour and energy costs, inadequate research and development are just some of the problems facing farmers.
Then there is the devastating impact of natural disasters, pest infestation, deplorable road conditions and praedial larceny.

These are some of the many issues the farming sector says must be addressed and arrested urgently if Jamaica is to realise anywhere near its full potential.

With the annual loss to praedial larceny put at a conservative J$5 billion, and loss to poor post-harvesting measures estimated at the same amount, it begs the question as to whether agriculture needs a state of emergency.

A review of Jamaica’s trade deficit with its regional neighbours and North American partners would suggest that such a measure is long overdue and the powers that be, even if they are unwilling to admit it, are aware.

“We want to cut down on waste. We waste approximately J$5 billion in value of agriculture every year due to post-harvest losses,” Agriculture and Fisheries Minister Dr Christopher Tufton told greenhouse farmers at the Cecil Charlton Hall in Mandeville on Thursday.

“Government has a responsi-bility to correct that, but to correct means that you have to standardise processes, and doing so we are going to make some changes,” Tufton continued.

Addressing the same function, Webster McPherson, an agronomist employed to the Ministry of Agriculture, declared that the knowledge gap between technical experts and those in need of their expertise was largely responsible for the failure to maximise production and productivity levels.

McPherson pointed out that 13 extension officers had received specialised training and had been designated master trainers more than a year ago.

However, McPherson said that they were not reaching the farming community because they were engaged in the regular service.

He argued that, as a result, farmers were, for the most part, not engaged in best practices, even where the necessary information was available locally.

But Tufton countered that it was up to farmers to access the available government assistance to ensure the viability of their businesses.

In the meantime, Lieutenant Colonel Paul C. Dunn, who was appointed praedial larceny prevention coordinator in December 2009, is convinced that this is a problem that must be addressed quickly.

The retired army officer told The Sunday Gleaner that praedial larceny is particularly challenging in that it destroys the livelihood of farmers and is a very serious deterrent to people thinking of entering the sector.

He added that with the value of the agricultural sector for 2007 estimated at $79.7 billion, the $5 billion loss represented approxi-mately six per cent of the gross output of the sector.

Praedial larceny has long ceased to be a petty crime, with vehicles of heavily armed thugs now stopping at farms and stealing all the harvested produce or reaping all they want.

Tufton has declared a “zero-tolerance” approach to praedial larceny and is trying to get the public’s buy-in on a number of initiatives which are being implemented to tackle this scourge.

These include a reward for information leading to arrests through the Crime Stop programme, and education about laws that govern praedial larceny.

While data on the overall economic impact of poor farm roads on production levels was not immediately available, CEO of the Rural Agricultural Development Authority (RADA),

Al Powell, told The Sunday Gleaner it would be a significant figure.

He cited the case of a small stretch of farm road that had been repaired in Portland recently with European Union funding.

“We estimated that the value of the production that should be coming out of the communities served by that road would be about J$14 million, but we were only seeing about $6 million.

“Preliminary figures provided by RADA suggest that even with the best of intentions, Jamaican farmers will have poor farm roads to contend with for some time to come.

But that was nothing more than the proverbial drop in the bucket, and farm roads in five parishes are due to get some attention under a J$160 million USAID project set to begin between September and October.