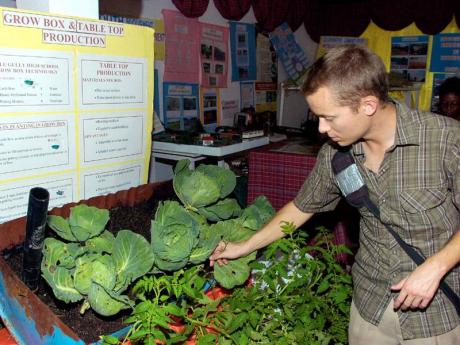 Peace Corps representative Curt Lindley left Idaho in the United States to make Manchester his home just over a year ago. As part of his Peace Corps duties, Lindley is assisting with a nutritional outreach programme. -Norman Grindley/Chief Photographer 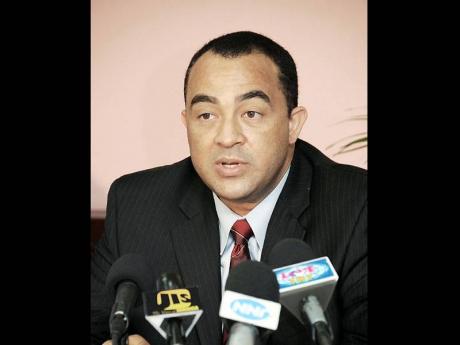 Last week, Grow went viral when Minister of Agriculture Dr Christopher Tufton sat down with The Gleaner's Damion Mitchell for an online chat. Tufton fielded questions from you, our readers and viewers, about the agricultural sector. See the three-part video at www.jamaica-gleaner/videos!
1
2

A native of Idaho in the United States signed up for the Peace Corps and found himself in Jamaica a year and a half ago helping families, especially those with malnutrition issues, is learning sustainable farming practices.

Curt Lindley was present inside the award-winning Manchester agricultural village at the annual Denbigh Agri-Industrial Show, ready to provide details on how to make backyard farming easier for families without gardening space.

"Mandeville feels like home. I can only imagine what the reception is going to be like when I return to Idaho," he said.

As the heat closed in on the patrons packed inside the Manchester parish pavilion, Lindley used a handkerchief to mop the sweat from his forehead without a second thought.

The expatriate, who seemed used to the heat among patrons fanning themselves, smiled at the idea of working with Jamaican families in a sector, such as agriculture, where innovative backyard farming opportunities are available.

"People here are not receptive to the idea at first, but once they've tried it, they tell me it's a great idea."

The idea he speaks of is the Jamaican version of the earth box, constructed as part of the Grow Box and Tabletop Production.

"We got an earth box which, as you can see, is a box with soil and it waters itself.

"We took it apart to see how we could make it Jamaican," he said.

The Jamaican version was made out of an old food drum (not oil because of the potential for residue) and chicken mesh, instead of a plastic crate.

The design of the structure allows for water to collect over time and gradually be absorbed by the soil itself.

This method relies on less water and fertiliser, as well as porous soil mixed with compost or coconut fibres and peanut trash.

"Potting mix can be expensive," he said. "This is natural."

A variety of vegetables may be planted, ranging from tomatoes to rice.

"I would like this idea to grow as a seed in the minds of farmers," Lindley said. "Everyone seems to get into it. It's a really simple concept."