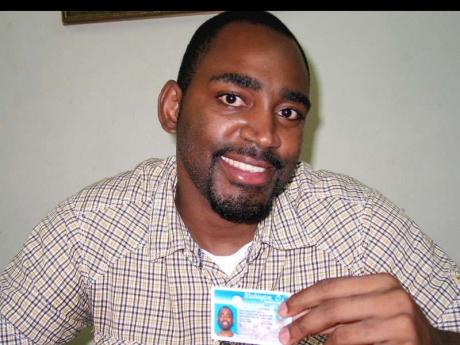 Rian Gayle displays his US driver's licence which he uses to drive locally. He obtained the licence two years ago in Washington DC. - Photo by Philip Hamilton

The cries of the local hearing-impaired community have not fallen on deaf ears as recent amendments to the Road Traffic Act now allow them to apply for driver's licences.

The amendments, gazetted on June 11, 2010, saw the removal of a clause requiring hearing-challenged drivers to install a device to alert them of external vehicular sounds via a flashing light in the car.

"We're happy that the change has finally come but we're disappointed in how it became known to us," said Gloria Goffe, executive director of the Combined Disabilities Association (CDA), who learnt of the regulation change through the media.

Goffe said advocacy began in the 1980s and bore fruit in 2005 when legislative changes allowed conditional driving for deaf persons. However, the main challenge was the installation of a monitoring light device which, according to Goffe, was not only unavailable but also obsolete.

"Countries that allowed deaf persons to drive were not using it anymore. Although we continued saying that over and over, somehow the change did not come," the executive director said.

The amended regulations now require deaf persons applying for licences to only produce a certificate from an audiologist confirming their level of hearing.

Many deaf persons have been driving on Jamaican roads for years, however, most are holders of US licences.

Deaf Drivers for Equality (DDE) is one group which was in the forefront of lobbying for change to legislation.

The DDE established a campaign on Facebook alerting persons of the plight of deaf in Jamaica.

Member Rian Gayle, who has held an American driver's licence for over two years, told Automotives that members of Jamaica Association of the Deaf tried unsuccessfully for years to do driving examinations, only to be turned away.

Gayle, who last attempted to obtain a local driver's licence in 2004, said he was allowed to do the test only because he never told examiners he was deaf.

"When I was on the road driving and he [the examiner] was indicating to me to turn left or right. I became confused with the instructions and that's how he knew I was deaf," said Gayle through an interpreter.

Gayle's colleague, 25-year-old Kamar Groves, who said he learned to drive at 15, spoke of frustrations encountered at the examination depot.

"We are human. If you block the deaf from driving, it is more like discrimination for us," said Groves, who recently sought information from the Island Traffic Authority (ITA) — the body responsible for issuing licences.

The government, however, made good on a promise a year ago to provide training in basic sign language to personnel from the ITA, as well as Jamaica Constabulary Force personnel in order to facilitate the deaf.

ITA Chief Inspector Clive McDonald told Automotives his office had only been alerted about the two-month-old changes in a memo received on Friday, July 30.

He said the ITA was in the process of revamping its testing procedures to accommodate the change in regulations while also informing employees at examination depots.

McDonald said he urged deaf persons applying for driver's licences to bring an interpreter well as an audiologist's certificate.

"We are fairly confident we are equipped to take this on with immediate effect because we had started the process before," said McDonald.