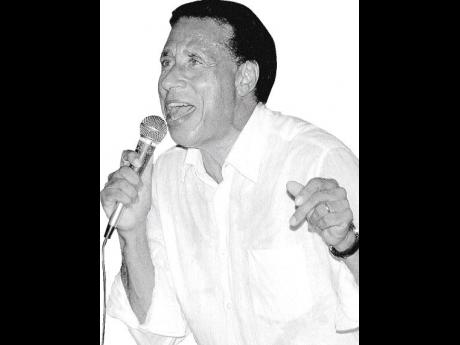 Tony Gregory's Gypsy Girl is a delightful anachronism in Jamaican music even 28 years after its release, as Jamaicans' taste for home-grown musical fare has grown to encompass more of the wide range of sounds a virtual world makes possible and available.

When Gregory came to Jamaica in 1962 ,"one of my usual visits", on a two-week break from Germany (where he lived for about 35 years), the climate for the song he had done as a demo was decidedly reggae, with Yellowman heralding the rise of dancehall as a mainstream force over the horizon.

Gregory said not many music business movers and shakers in Jamaica believed in Gypsy Girl, an ode to a decidedly un-Jamaican character with more than a touch of the ballad but done on an uptempo rhythm with nary a hint of reggae in the drum and bass. Tony Gregory wrote and sang:

Gypsy, you turn on my love light/

And whatever you want now/

Tonight is the night/

Gypsy, with eyes that see through me/

With arms that surround me/

You got me tonight/

Gypsy, I'm under your spell now/

And you know me well girl/

So love me tonight/

Cause I want your love so badly/

However, as much as he pined for his Gypsy girl in song, she was not a hit with key men in Jamaica.

"Nobody wanted it," he told The Sunday Gleaner. The former lead singer for Byron Lee and the Dragonaires took it to Dynamic Sounds, the Dragon was not in and his son rejected the song. Then, it was over to Sonic Sounds where Neville Lee "was not that enthusiastic but decided to go ahead".

"I did something quick with him, worked something out and left," Gregory said. In short order, he left Jamaica and, about a week after his departure, Lee called to say that the first run of Gypsy Girl had sold out. "They released it to radio and the people went wild," Gregory said.

He estimates that Gypsy Girl went on to see about 60,000 copies in Jamaica, spending all but three months of one calendar year on the charts, including a strong number-one run. Then there were sales in the wider Caribbean and the many countries where it was released by Ariola through its outlet labels, such as BMG in Germany. Holland and Italy were also included in the Gypsy Girl European successes.

That was not bad for a demo recording on which Gregory played all the instruments and didn't intend to sing on in the first place.

"That particular number was written for someone else who could not manage it," he said. A popular German singer had asked Gregory to write some material for him, which the singer/songwriter duly did.

"I just woke up one night and it just came to me," Gregory said. "It was snowing, I was in Munich. I had one or two other numbers I was going to go in and record. The melody came to me. I worked on it very quickly," he said. Not only did he play all the instruments, but Gregory also handled the mixing and production.

"For me it was a song for other people to sing," he said. "It is one of those songs that is hypnotic. You can always sing along with it. For the German market they tend to like easy melodies. That's the reason it went in that direction. And it worked here as well."

"In that period, to come in and hold the market, that was incredible. The professionals out here did not believe it would do anything at all."

And living in Germany and working all over Europe, in Australia, Africa and Japan from there, Gregory was not even in Jamaica to give Gypsy Girl the critical live performance push. There was one show at the Wyndham and two television shows. There wasn't even a video, which Gregory says he had started doing before they really caught on in Jamaica. "It just came out and became a hit. I did not need to do a video. I did not need to promote it. It just came out and did what it was supposed to do," he said.

Gypsy Girl is included on the album Tony Gregory Now, along with It's All Right With Me which was, ironically, also recorded by the singer for whom Gypsy Girl was originally penned.

And it was still the demo version of Gypsy Girl which was included on the full-length project. For, although he says "if I was to have done it properly I would have done it much better", Tony Gregory never re-recorded Gypsy Girl.