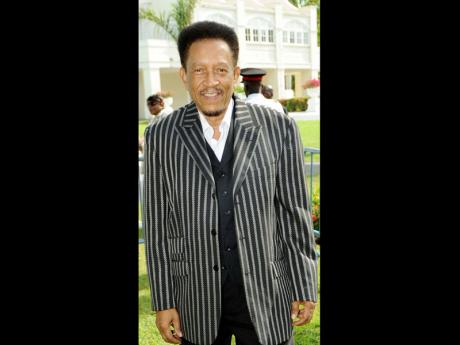 Dapper dude, Derrick Harriott, after he received the Order of Distinction for contribution to the Jamaican music industry, at King's House in St Andrew last year. - Ricardo Makyn/Staff Photographer

Derrick Harriott's 1967 Solomon is the age-old story of a man, woman, money and wisdom, the last not so much in the sense of balanced, informed decisions, but womanly wiles. For while the legendary biblical king's decision-making capability was renowned, so was his appetite for women.

And it is in dealing with women's wiles that Harriott, in a song penned largely by Junior Soul (later Junior Murvin of Police and Thieves fame), claims to be wiser than the king around whom the most romantic verses in the Bible are centred:

"Solomon was the wisest man

But he didn't know the secrets of a woman

I am wiser than Solomon

So girl don't play no tricks

Just be calm and be still

Don't run me down for my bread

You wasn't around when I was slaving myself."

And his voice soars into the chorus, which contains the writer Soul's name:

Harriott, who claims pioneering status in performing, producing and having his own shop, says that Solomon was worked out at 125 King Street, where he ran 'Derrick's One Stop'. He acquired it from Neville Foo-Loy, who was head boy at Excelsior when Harriott was a student there.

The name was expanded to 'Derrick Harriott's One Stop' when he relocated to Twin Gates plaza in 1973. That 'uptown' location has proven to be enduring, but the back of the downtown set-up was where the creative juices flowed. "Junior, Horace Andy, everybody used to rehearse at the back of the shop," Harriott said.

Soul actually auditioned for Harriott, who produced a number of songs for him, but Harriott says he missed out on the huge hit Police and Thieves when he went abroad for a short time. That was also the case, Harriott said, with Dennis Brown and No Man is an Island.

But there was no missing out on Solomon. "He (Junior Soul) came with this song and said he did it for me. He composed it especially for me. I probably put in a line or two, but the concept was there," Harriott said.

Solomon was recorded at the same Dynamics Studio session as Stop That Train and Keith and Tex's Tonight, Harriott crediting the genius of guitarist/arranger Lynn Tait with the impact of the music. Joe Isaacs was on drums and Gladdy Anderson played keyboards. "Everything gel from there. Sometimes you do a recording and you feel it right away, that this is a hit," he said.

It was premiered on RJR by disc jockey Charlie Babcock and Harriott remembers how people talked about Solomon and sales soared. Of course, he was in a good position to benefit as a record retailer. For popular songs "the juke box people used to come and buy hundreds". And there was a time when he used to walk with his bag and peddle the vinyl discs.

Harriott says Solomon is "one of those songs that has lived. When I do it in a medley it always gets a great response. It has done its work".