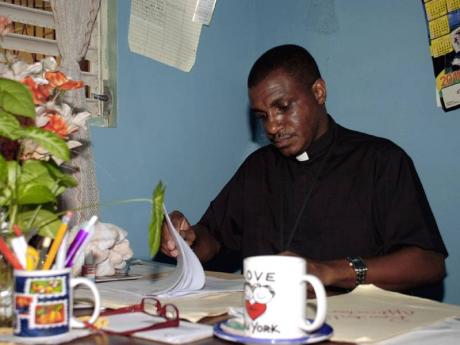 Rector Alwyn Hall, of the Anglican Diocese of Jamaica and the Cayman Islands, at work in his office at the Amy Muschett Home for the Aged in Duncans, Trelawny. - Photo by Christopher Thomas 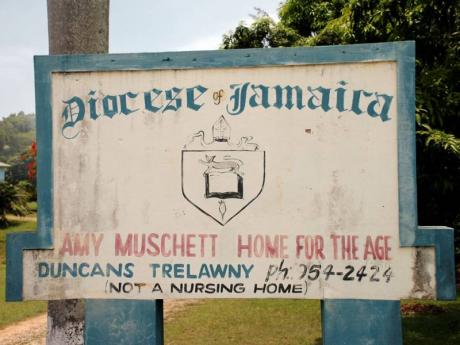 The sign for the Amy Muschett Home for the Aged. 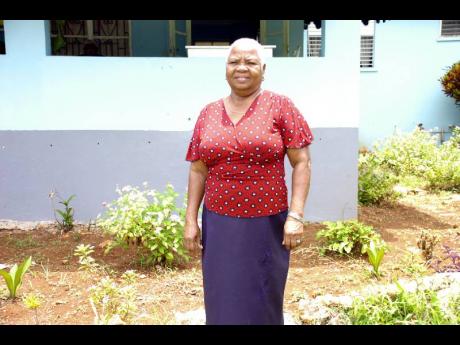 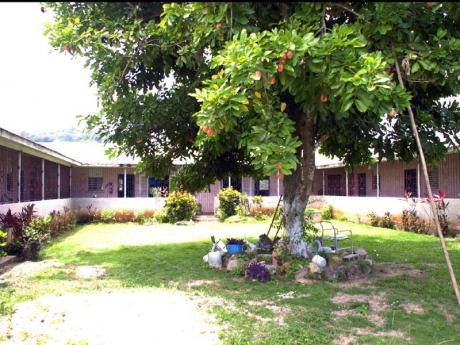 The Amy Muschett Home for the Aged in Trelawny, which has been operational for the past 48 years, continues to cater to the needs of its residents despite many challenges.

The home was donated in 1962 as a gift to the Anglican Diocese of Jamaica and the Cayman Islands, as well as to the people of Trelawny.

It was donated by Amy Maud Muschett, one of Trelawny's plantation owners at the time and the great-grandaunt of the parish's current Custos Rotulorum, Paul Muschett.

"It was established to accommodate people who were poor, and so they would not have to pay to be accommodated here," said Reverend Alwyn Hall, rector of St Michael's Church in Clark's Town and chairman of the home's board of governors.

"It was a gift to the Diocese of Jamaica, and so the Anglican Church owned it, but it was operated by a group of trustees which included the Bank of Nova Scotia (BNS) at the time."

Hall, who has served at the home since 1995, told The Gleaner that the facility originally accommodated 22 residents but encountered financial problems over time, due to the high cost of living. As a result, the trust fund that was left by Amy Muschett to maintain the home, dried up.

"The trust was maintained by BNS, but it soon became depleted and therefore the home was unable to substantiate itself financially," he said. "We started to charge a fee to the residents. When I came in 1995, the residents were paying $4,000 for accommodation."

The fee gradually increased over the years; and now the residents pay $30,000 per month.

The Amy Muschett Home has 13 rooms, with 28 possible spaces for double occupancy. Fourteen residents are currently catered to - with three meals per day as well as snacks - and laundry and other housekeeping tasks done for them.

The home, which employs four attendants, a cook, a gardener, and a practical nurse, is adjacent to the newly-refurbished Duncans Health Centre, and the Falmouth Hospital is a 20-minute drive away.

"The residents live in semi-private facilities; they can share two to a room," Hall added. "We have maybe two single rooms available, and if a person comes and needs a single room, we can convert that two-bedroom facility into a single room, but they'll have to pay extra for that kind of arrangement."

He admitted though that there has been difficulty in maintaining the building over the years. There is need for landscaping work, perimeter fencing, a garbage incinerator, smoke detectors and fire extinguishers.

"There are some parts of the roof that are leaking, some of the windows and doors need changing, as well as general refurbishing to the building itself."

Hall said letters have been sent to various institutions, including some in the hotel industry, asking for help to supply furniture and assist with building repairs.

"We are trying to reach out to the community and different persons to see where we can get some help, because, even though we charge that $30,000 per month and we are able to take care of our bills, it still cannot be extended to maintaining the infrastructure," he acknowledged.

Nonetheless, Hall expressed optimism that their operations will bear fruit.

"Regardless of our struggles, we have managed to keep our heads above water; we are floating," he announced.

"We have been able to accommodate persons comfortably. It's not an extraordinary kind of facility, but it provides comfortable living; people who want to live a simple way of retirement, this is the best place for them."