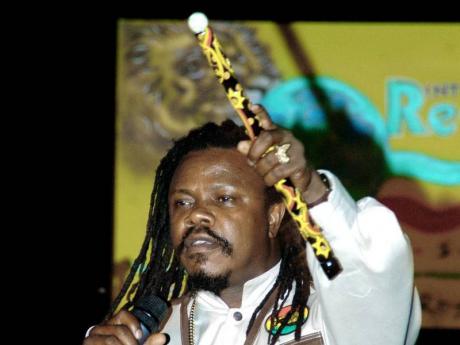 He Is celebrated and revered for his uplifting musical messages, delivered through songs including Sweep Over My Soul and What We Need Is Love. He was even awarded the Order of Distinction by the Government in 2007.

But earlier this year, reggae star Luciano hit the headlines in a shocking story that brought his reputation into question. Following a shoot-out between a gunman and police officers at Luciano's home in in March, the reggae star was charged with harbouring a fugitive.

The gunman, Andrew Senior, also known as 'Conqueror', shot and injured three police officers in the incident, which eventually ended when he was shot and killed by the police.

Subsequently, Luciano, whose real name is Jepther McClymont, was arrested and charged with harbouring the gunman, an accusation the singer refutes.

"You see what happened ... my gate is always open to Tom, Dick and Harry," says 45-year-old Luciano. "But I've learned that that is to my own peril. Out of the kindness of my heart, I open my home to people, but not everyone that comes in has good intentions. That's the situation I found myself in."

He continues: "This was someone I started helping from years ago. He was trying to change his life - he had children. But I got caught up in this situation. This man was wanted [by the police] but he wasn't advertised as a wanted man. So the way that the security forces went about handling this situation was really barbaric.

"They [the Jamaican government] acknowledged me as a man who was worthy of being given the Order of Distinction; a man who has respect in the community.

"So when they learned that I had a wanted man at my place, they should have approached me better than they did, rather than accosting my property the way they did.

"Even an inspector told me that after the case is over, I could sue the authorities for reparation of my house and for the way that they damaged my property and defamed my character. So I know my rights. But for now, I just swing low and take it easy."

He continues: "They [the prosecutors] have nothing on me. My record is clean. They're accusing me of harbouring a fugitive but it wasn't like that. The brother was looking for a safe haven and unfortunately, he came to my property."

Due back in court next month, does Luciano regret opening his home and extending his kindness to so many people?

"When you're seen as a leader, people will always come to you with their problems," he says. "Some people go to pastors - look at [alleged drug lord] Dudus and Reverend Miller.

"That's the thing; people who need help aren't going to go to the government because the government will lock them down. So that's the position that a lot of artistes find themselves in; people come to us for help. But this situation has really opened my eyes. It's nice to be kind but you have to be careful too."

Though Luciano explains he wasn't at his property at the time of the shoot out, did it frighten him to think that he too could have been caught up in the crossfire had he been home?

"Honestly empress, I grew up rugged. I never grew up as no soft, uptown yute". So I'm used to the obstacles that come along life's way. But what did frighten me was that any of my family could have been hurt in this situation. But thanks to the Almighty, they came out scratch free."

Now, with his focus back on his music, Luciano (or Luci, as I found myself calling him, thanks to his endearing character) is excited about the release of his new album, United States of Africa. The album title addresses Luciano's desire to see the various African countries uniting to form 'one Africa'.

"The various leaders in Africa have to recognise this need," he says. "Once the leaders realise that Africa was once a mighty nation, they'll realise that they need to come together as a nation. The so-called leaders of the world are calling for one world order - so why not one Africa? Why should a man from South Africa need a Visa to get into Ethiopia? It's a joke. We can't just turn a blind eye to this, empress."

Well known for his desire to educate and inspire people through his music, Luciano doesn't stray from this way of thinking on his latest offering.

Proclaiming himself a messenger, the star has little time for the more frivolous aspects of reggae's dancehall scene, and so, unsurprisingly, didn't get caught up in the 'Gaza vs Gully' warfare that dominated the dancehall scene last year. (For those not in the know, Gully and Gaza - in short - were two opposing groups in the dancehall scene. Gully is spearheaded by dancehall star Mavado, while Gaza was fronted by fellow deejay Vybz Kartel).

"Ah, it's a joke ting, man," Luciano said of the warfare between the two groups. "I believe all of that is for the yute - just like Christmas. When you're a child, you enjoy Christmas, but when you grow up, you realise that Santa Claus is false!"

So, of course, Luciano has no intention of joining the dancehall bandwagon. Instead, he says he'll continue to spread positive messages through his music.

"Not everyone has gone into this dancehall craziness; talking about Gully and Gaza and all that kind of stuff. There are big people in this world; educated people who have studied and are elevated and know what's important in life. There are plenty of people who still want good, conscious music. So all when me reach 90 years old, me still ah go strike di hammer [laughs]!"

United States of Africa, Luciano's latest album, is now out on VP records.