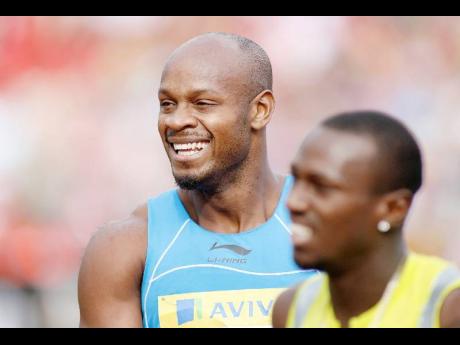 Former world 100-metre record holder Asafa Powell may seem to some to be playing third wheel among the sport's 'big three' sprinters, but according to his agent Paul Doyle, this is far from the truth.

Though not boasting much these days with a major title still out of reach and his 9.72 seconds former world record time long eclipsed by his two rivals, fellow Jamaican Usain Bolt and American Tyson Gay, the 27-year-old Powell, Doyle contends, remains a very popular and in-demand figure on the international circuit.

The agent would, however, not speak to reports that the sprinter has lost a great deal of his bargaining edge on the circuit, with suggestions that his once lofty appearance fee rates have plummeted in recent times.

It is understood that Powell currently commands estimated rates equivalent to J$7-9 million on the circuit these days, a far cry from the J$22-$26 million that Bolt is able to demand, according to some industry insiders.

"I don't answer anything about money," was Doyle's response when The Sunday Gleaner asked for confirmation of the athlete's present appearance fee rates.

The former national champion also recently signed an endorsement deal with manufacturers Li Ning, after his US$750,000 deal with long-time sponsor Nike ended on December 31, 2009. Nike reportedly offered the sprinter less than half the value of the previous contract, forcing him to move to the Chinese company, which reportedly presented a better deal.

Powell has struggled to reclaim the global appeal he enjoyed at the height of his career in 2006, when he twice equalled his first record mark of 9.77, won gold in the 100m at the Commonwealth Games and also claimed 10 Grand Prix victories, including all six Golden League meets.

But according to Doyle, Powell remains one of the hottest properties in the world and continues to enjoy the respect of the top promoters across the globe.

"There has been no indication that he (Powell) has lost any appeal across the globe. In fact, right now we have five meet directors who are trying to make us offers as we speak. Every meet wants Asafa Powell there, he is still a very popular athlete," assured Doyle. "To suggest that he is not exciting to watch nor still in demand is wrong."

The agent dismissed claims that his charge is being overshadowed by Gay, who has enjoyed the better results in the rivalry between the two.

"He (Powell) has had some injury problems and has not been able to train well, but up to that point he was running 9.8s, so its unfair to even suggest that he has lost a beat," said Doyle. "Tyson Gay has run 9.78, and although Asafa was windy early in the season all his times have been pretty good."

Doyle turned his attention to the sprinter's two meetings this season where he faced his rivals.

"I really don't see where he is being overshadowed by Tyson (Gay). When Asafa ran in Paris (against Bolt) he was running with a hurt groin, and when he lost in Gatestead (to Gay) he was ahead at 90 plus metres," Doyle argued.

Doyle, who referred to Powell as a legend in the sport, also rejected suggestions that he is suffering owing to the fact that he does not have a major gold medal to his credit. Doyle pointed instead to his popularity leading into the last Olympic Games.

Editor's note: A CMC report yesterday said Powell's handlers had decided to end his 2010 season because of injury. The report quoted Doyle, who said the decision was taken after Thursday's Zurich Diamond League meet.