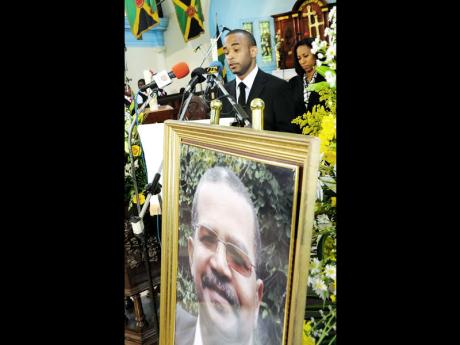 "Right has become wrong, good (has become) bad, and the subculture (has become) the norm," said Smalling, who delivered the sermon at the service held at the Garrison Church of Ascension, Up Park Camp, yesterday.

"Love, decency, honour and integrity are no longer celebrated as characteristics of the great, but rather as the hallmark of the weak," he said.

Major Smalling argued that Jamaicans have embraced what he called a "one-upmanship ideology", adding that this has contributed to Jamaica being labelled the murder capital of the world.

With Prime Minister Bruce Golding and Opposition Leader Portia Simpson Miller in rapt attention, the JDF chaplain said Jamaicans appear to have lost control of their self-determination, "as those in whom we have anchored ourselves, spiral out of control."

"Loyalty has become a catch word banded about by people with power as they seek to rape the already yielded and wounded powerless," he said.

In an thinly veiled jab at some members of the private sector, Major Smalling questioned the sincerity of "those of our good friends" who challenge Jamaicans to be patriotic, then invest the wealth they amass here "somewhere safer."

Meanwhile, Simpson Miller, the leader of the opposition, was among several persons who paid glowing tribute to Dr McGill, a former People's National Party member and past member of parliament for Western St Mary.

Dr McGill shot and killed in Manchester earlier this month.