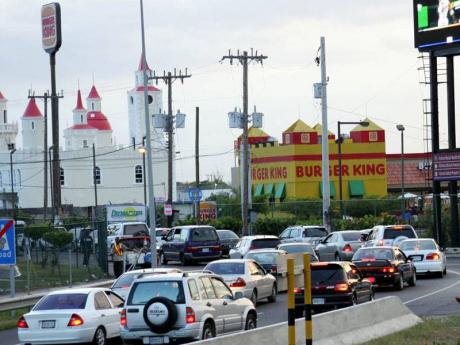 A Burger King store is seen opposite Portmore Mall in St Catherine. The American-owned chain is selling out to equity firm 3G Capital. - File

Burger King Holdings Inc is selling itself to private equity firm 3G Capital in a deal valued at US$3.26 billion.

Richard Lake of Restaurant Associates Limited, the Jamaican franchise holder, said the ownership change would have "no effect whatsover" on local operations, but added a rider.

"It depends on whether they change management and policies ... but we assume both will remain the same," Lake said.

Burger King's Latin American and Caribbean operations, he said, are among the best-performing regions.

Thursday's US$24-per-share offer comes after a day of speculation about the deal sent shares up more than 15 per cent. The stock continued to make big gains Thursday.

The offer is a nearly 46 per cent premium over the company's stock price before rumours began circulating about the deal.

But Burger King has struggled because the economy has been bad for its most important group of customers: young men.

Under the terms of the deal with 3G, Burger King's Chairman and CEO John Chidsey will become co-chairman of the board.

3G managing partner Alex Behring will be the other co-chairman.

The group - TPG Capital, Bain Capital Partners and Goldman Sachs Funds - still owns 31 per cent of Burger King's outstanding shares and has agreed to tender its collective stock in the deal.

Burger King, which has 12,000 restaurants - 27 of those operate in Jamaica - already has connections to private equity firms.

The Miami-based company has a market capitalisation of about US$2.5 billion.

In a research note, R.W. Baird analyst David E. Tarantino told investors on Wednesday that he was boosting his price target on the stock, expecting it to climb 15.5 per cent in the next year, notwithstanding that news of the buyout at the time was still speculative.

"Media reports ... seem plausible, but such a transaction remains highly uncertain," he wrote to investors, adding that the Miami company has healthy cash flows and an opportunity to increase productivity while expanding overseas.

Burger King Holdings' net income in the fourth-quarter to June 2010 fell nearly 17 per centon a slide in sales and as costs for ingredients and packaging climbed.

The company also got a smaller tax benefit than last year.

Revenue slipped one per cent to US$623 million.

Full-year revenue slipped one per cent to US$2.5 billion, down from US$2.54 billion.

"In fiscal year 2010, we faced sustained levels of high unemployment and a fragile global economy that, combined, made this one of the toughest operating environments in recent history," Chidsey said in a statement at the release of the company's earnings report in August.

3G is expected to begin its effort to acquire the outstanding shares by September 17.