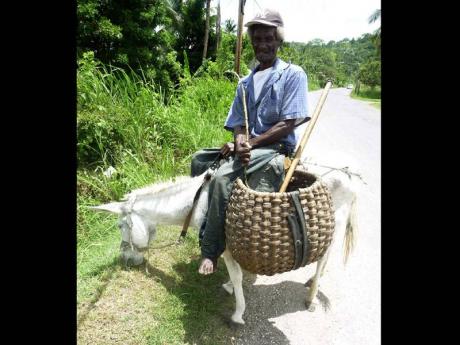 'Doctor' and his trusty donkey. 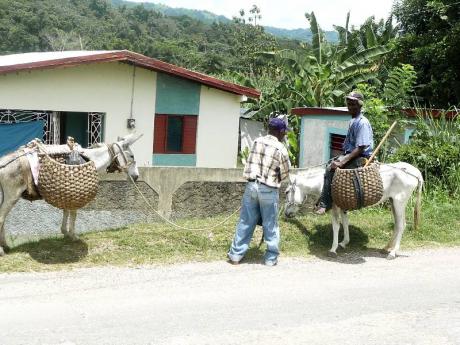 Farmer Duncan 'Doctor' Palmer (right) chats with a friend before heading to the nearby barber shop. - Photos by Christopher Serju
1
2

EVEN IN this day of high-tech agricultural practices, the donkey continues to play a key role in farming communities in Clarendon. "If I eat food a him mek mi eat, is a blessed thing to me," 74-year-old Duncan 'Doctor' Palmer said as he sat astride his donkey. He had travelled from Summerfield, taking a short cut across the river to reach Pennants to get a haircut and was chatting with a friend, equipped with a similar mode of transportation.

Palmer, who has been farming since age 16, has a deformed right leg and so when he said the animal "a mi foot", he was correct. "It cannot carry me," he said of the bad leg, so (the donkey) "is a blessed thing to me".

Still, after six years, Palmer is looking to trade the animal in for a newer 'model'. When he acquired the donkey, it was just changing out teeth and so he estimates that it was about four years old and would now be at least 10 years old. He admits that the donkey has had a hard life, given the amount of work it has put in over this time. Still, it is obvious that he treasures this prized possession, although they seem to differ over its nutritional needs.

On the occasions when he chooses to stay home instead of going to his field to work, usually because of tiredness, Doctor treats the donkey to a mixture of sugar and cornmeal.

"Cornmeal a stronger food, cornmeal a nourishment, grass nuh nourishment, but him love low bite," he said, while pointing to the donkey's cropping of the grass very low to the ground, by way of explaining what he means by "low bite". As if in defiance of its master, the animal renews its feeding with a vengeance.

Despite dedicating all of his adult life to farming, Doctor told The Gleaner that he has not reaped the financial rewards consistent with his efforts, going so far as to say there is nothing in farming. Still, he continues to do it and admitted that he is in the process of clearing a piece of land for cultivation, despite the ongoing setback from thieves.

"When a man born wid ambition, is a great thing, you know; you have the lively and stronger than me who deh pon de street a beg people, you know, yah listen mi? But if I plant a banana, days to come I might able fi cut one," he lamented. "So I say to myself, better I have something looking to get than have nothing looking to get. You plant likkle pumpkin, spen' couple dollars and plant yam, banana and plantain, the man dem (thieves) cut the best one," he added.

The father of seven, who lost his wife some time ago, had an interesting observation for today's young people.

"These generation don't business wid you. Any time you reach certain age, everything that you do is wrong."

Then he was off to the barber shop, astride his trusty donkey.