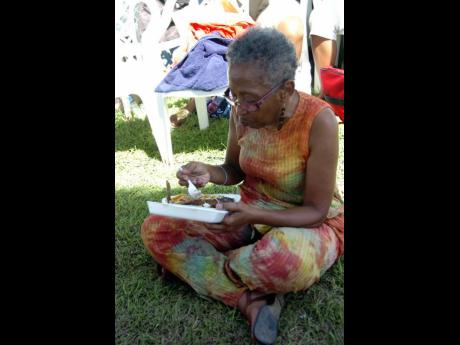 Abigail Hamilton gives a taste of 'Let it Rain' to an audience at the Boulevard Church Of The Nazarene, Auburn Road, Kingston 20. - Photo by Marcia Rowe 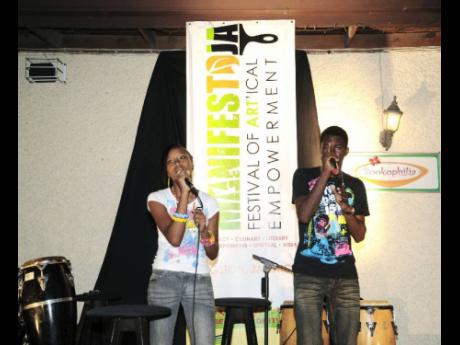 Ancient Priest performs at the Boulevard Church Of The Nazarene, during the launch of Abigail Hamilton's debut album 'Let it Rain' on Friday.
1
2

Hip hop was the predominant genre on Friday night, with performers pointing out that the musical form originated on the streets of Kingston with Uroy.

The artiste emigrated to the states with Kool Herc, grew into a phenomenon and exported back to Kingston.

So 'Rhyme and Reason', the third instalment of ART'ical Exposure, while not carrying the consistent message of the first two, was definitely the most energetic.

Energy, however, did not endear all the performers to the audience, as only some of the hoard of rappers who performed stood out.

Before the rappers came with their presents for the crowd, there was an interesting cameo from prominent human rights activist Yvonne McCalla Sobers. Not armed with her own rhymes, McCalla Sobers read from a book she said contained proverbs from the ancients about sex. In her introduction, she said that sex had been around a long time and, despite recent pronouncements by singers who claimed they invented it, "it deh bout long time".

Some of the subtle, yet suggestive, sayings included: "He who marries for love, shall have bad days but good nights" and "Better a small penis than sleeping alone."

Another non-rapper was Stratdon, who gave a soulful performance. Accompanied by a guitarist, he pleaded for love and encouraged hope. He lamented the practice of jungle justice, saying, "The streets have become the courthouse ... no respect for life."

After Stratdon, there was a jam session on stage with several rappers taking the stage. Triple Threat and Skanatana stood out as they exchanged lyrics.

Jah Balance was next and he had the crowd eating out of his hands with his duet with Donisha Prendergast. They both sang of their love, which they were "cooking", equipped with "green spices, beans and bananas". Apart from being witty, the song was soothing. Jah Balance was the only artiste to get an encore after the farmer from St Ann began to speak of the wondrous things the marijuana plant had done for him, such as seeing a "donkey in blue" and "a rat shaking a tambourine".

After Jah Balance, Kariuki represented himself with forceful raps, which reflected on his shortcomings and promise.

The Sickest Drama (TSD) also dropped some slick rhymes; and Jouina Sky, with the speed of American rapper Twista and the energy of a hypeman, certainly left an imprint.

K. John had a tight set, showing versatility with conscious and romantic raps, even inviting a young lady from the audience on the stage.

Shermon Dadz had the girls screaming with his female-friendly lines, promising to hold the ladies like a "trophy". Dadz's enjoyable set was, however, spoiled when he objected to his time limit, trying to overrule the organiser's request that he step off the stage. Eventually he acquiesced, but not before fraying the unity of the event.

One of the headliners for the night, Five Steez, followed and his songs, Rebel Music, I Am and Slaving on the Plantation, were well received by the crowd.

The last of those songs from Five Steez, who is known in local rap circles as the five-point star, received the greatest feedback. The song is a quasi-autobiography about working a nine-to-five job.

Five Steez asked what was the point "of my college education, if I'm here and the knowledge getting wasted".

Kabaka Pyramid, the final performer The Gleaner saw, was explosive, direct and spiritual.

Though serious, his performance had a light feel to it as he engaged the audience with witty, thought-provoking lyrics.

Kabaka Pyramid told the crowd his "appetites for mics" was like "kids for Christmas" in the song Lyrical Exercise. He called up fellow artiste Sly Rankine and the duo gave an account of a young Kingstonian woman in She Gone, who was shown a bad example by her mother and, in turn, led a dangerous, promiscuous life.