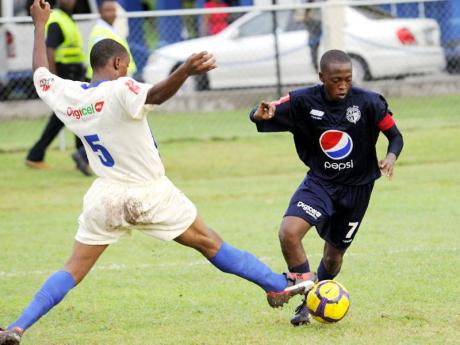 In a match played at his school's Old Hope Road grounds, Walker, who has in the past represented Jamaica at the Under-17 level, scored in the 21st and 43rd minutes to guide his team to a 3-0 half-time lead.

He then returned in the second half with more purpose, and showing good, close touches, positioning, dribbling skills and finishing, netted again in the 67th, 74th, 85th and 87th minutes.

The home team, buoyed by their supporters, pinned Cumberland to their half for the most of the game.

"It was difficult to motivate the guys after we realised that Cumberland were not going to be competitive," said JC's coach, Alfred Henry. "However, in the end we did and pulled it off."

Henry added: "I saw a few things that I liked, but against a team like this it's hard to assess the overall performance. We just have to look forward to our next game."

Cumberland's coach, Ruel Carvey, said his team was outplayed by a superior outfit.

"It seems as if our pre-season preparation was not enough as we were easily second best," said Carvey. "There's a lot of work to be done, but I expect us to improve as we should have a few players coming in for our next game."

Meanwhile, ISSA yesterday announced that Haile Selassie (Group B) and Kingston High (Group A) have withdrawn from the competition.