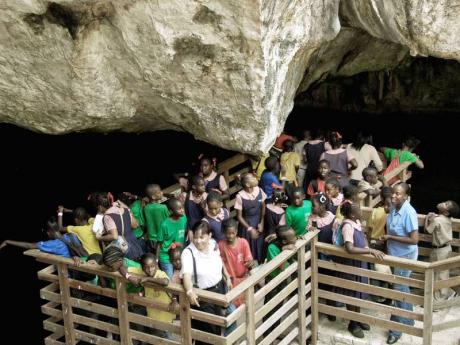 Students from St Andrew's Rosseau Primary take part in a tour of the Two Sisters Cave in Hellshire, St Catherine, as part of the Urban Development Corporation's annual Hellshire Environmental Fair. The fair was put on as part of Biodiversity Day, which is celebrated internationally and is aimed at educating people on how to take proper care of their environment. - Colin Hamilton/Freelance Photographer

Many Jamaicans, especially those in the Kingston Metropolitan Area, know Hellshire, St Catherine ,for its accessible beaches and delicious seafood.

However, few people recognise the importance of the entire area known as the Hellshire Hills. The Hellshire Hills is recognised as the last substantial area of primary, undisturbed, dry limestone forest in the Caribbean and Central America.

Less lush than wet forests, dry limestone forests are nonetheless an extremely valuable ecosystem and natural resource. The Hellshire Hills are home to a rich and biologically diverse community, which is still being investigated by local and overseas researchers. A 1970 survey, led by the University of the West Indies, documented 271 species of plants - 53 of them found only in Jamaica.

In addition, at least six species of animals only found in Jamaica have been recorded in the area, including the Jamaican Iguana (cylcura colliei), the blue-tailed galliwasp (celestes duquesneyi), three species of the Thunder Snake (genus trophidophis) and the Jamaican fish-eating bat (noctilio leporinus).

Other rare and endangered Jamaican species that can be found in the area include the Jamaican coney and the Jamaican boa. The skink mabuya mabouya, and the Jamaican pauraque may possibly survive there. Wild hogs, several bird species and North American migrant birds also live in this unique habitat.

Hellshire Hills, has been under the portfolio of the Urban Development Corporation since 1968. It falls within the Portland Bight Protected Area and is therefore recognised by government as a protected area.

The entire area covers 160 square kilometres and includes a large expanse of low hills, white-sand beaches, limestone caves, salt ponds, scrub and cactus. Over the years, many environmentalists have been concerned that human activities and development pose serious threat to this national and regional treasure.