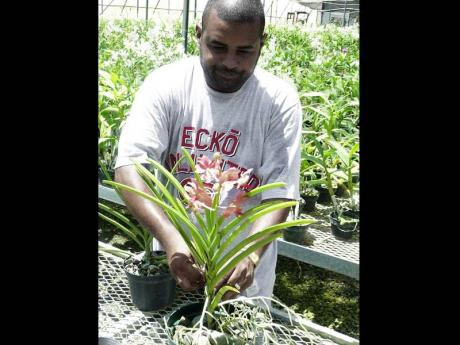 Lloyd Pringle checks on his star performer, the Hawaiian-Thai cross which was sourced from the Philippines. With anywhere between 22 and 30 spikes per year, it is a florist's delight. - Photos by Christopher Serju 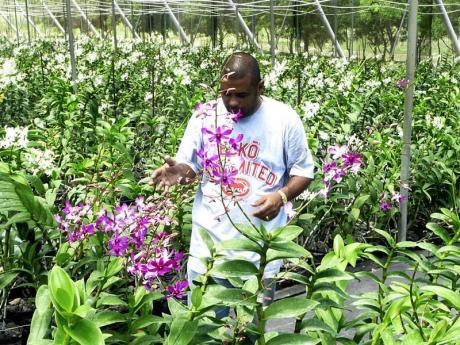 The Sun Vanda may be planted out in the field where it enjoys full sunlight, unlike most other orchid varieties which enjoy equal shade and sun.
1
2

WHEN RICHARD Padgette, new owner of Green Castles in St Mary, decided that he would pursue ecotourism interests instead of the traditional areas of agriculture for which the property had developed a reputation, he offered some of the workers a chance to buy into those areas.

Lloyd Pringle, who was managing the orchid operation, jumped at the opportunity to go into business and with his wife, Shana, bought out the operation and leased some of the land. That was three years ago.

"Most of the houses were at the stage that they needed replanting and so we brought in new plants and replanted. The houses are just coming back into production and we have three acres of cut flowers and half an acre of potted plants. The cut flowers are grown for reaping the blooms alone while the potted plants are sold whole," Pringle explained.

Orchids are a year-round business, with peak periods such as Mother's Day, Valentine's Day, Christmas and Secretaries Day and the Pringles sell right across the island, from Negril Point to St Thomas in the east. They use courier services to facilitate delivery to the distant wedding coordinators, event planners and florists who support the business, while for neighbouring parishes, such as St Andrew and Kingston, they make the deliveries.

Business could be better if he could only get the orchids to cooperate by blooming in sync with the demand for them, but Pringle says that, try as he might, the flowers just won't cooperate.

"The thing about orchids is that they produce in their season, unmindful of the calendar," he stated. "So like wedding seasons, there is not a lot of orchids because that's not their peak season - June to end of August. So we just have to send out what we have. We've tried everything and they won't bloom when they are not ready to bloom."

There are two blooming peaks for the premium flower, which the veteran horticulturist likened to a banana plant - October-November and February-March. It thrives in the hotter months, when most of the growing takes place, then the pace tends to slow come December-January.

After the main wholesaler in Hawaii went out of business, the Pringles were forced to source plants out of the Philippines to supplement the supply from another traditional source, Thailand. In the Philippines they found a winner in a Hawaiian-Thai cross, which produces anywhere between 22-30 spikes (blooms) per year, compared to the Thai strain which will give up about seven to 10 spikes over the same period. Other varieties grown include Dendrobiums and the Sunvanda which can thrive in full sunlight, unlike most other orchids which require half shade-half sunlight.

Despite success with the plants, business has not exactly been blooming, especially over the past two years.

"Things have been very slow. Before we were sending out like 1,000 plants per month, sometimes, right now we are lucky if we are sending out 200 plants, things have been that slow. For cut flowers, we were doing like 500 dozen for the month, now we are doing four, now nobody wants anything at all. Most people have cut their orders to half or a quarter basically," Pringle disclosed.

This notwithstanding, he has had to maintain the cost of keeping the plants free of insects and other garbage which could make a big difference in a business where sanitation is of the utmost importance.

"They require a lot of sanitation. Every day you have to go through picking leaves, dried up buds, etc, because fungus will grow on any kind of garbage left in your house," he related. "So to minimise that, we have to go through and take them out every day. Fertilising and spraying is another high cost. They are fertilised twice a week, while spraying takes place two or three times - depending on what you are seeing."

Rainwater, he added, is harvested for use in the business and an on-site well ensures that water is never short.

The thing about orchids is that they produce in their season, unmindful of the calendar. We've tried everything and they won't bloom when they are not ready to bloom.