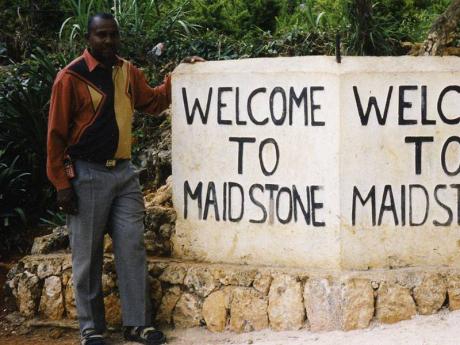 This man stands proudly beside the stone that marks the entrance to Maidstone in Manchester. - Contributed

Maidstone, in north-western Manchester, was one of the original 'free villages' founded by Moravian missionaries in the early post-emancipation era.

Missionaries sub-divided land, often from abandoned estates or poor backlands, for occupation by the newly free population under church sponsorship.

It is believed that the Maidstone area was named by early English settlers living in nearby Adams Valley, who thought that the shape of the surrounding hills resembled "the breasts of maidens", and who also noticed that the hills had many stones.

There was a Maidstone Plantation which estate records show was owned by Thomas Frith, then by his executor John Racker Webb and, eventually, by Hymen and Judah Cohen.

In December 1840, the Moravian missionaries purchased 341 acres of the plantation and sub-divided the land into a total of 98 plots, from one to 15 acres in size.

The plots were sold to ex-slaves on generous terms, allowing them to escape the high rents charged by planters. Lots of one to two acres cost about £6, while 10 acres and over cost £60- £70.

The settlers helped each other to clear land, build wattle and daub houses, and prepare fields to grow coffee in addition to cash crops. Each settlement also included a church and a day school. Soon, Maidstone grew into a large, irregularly-shaped village and the Maidstone peasantry became known as one of the sturdiest and most independent in Jamaica.

For the past three years, an Emancipation Day fair is hosted on the grounds of the Nazareth All-Age School in Maidstone. The school now houses a museum of artefacts from the plantation era.