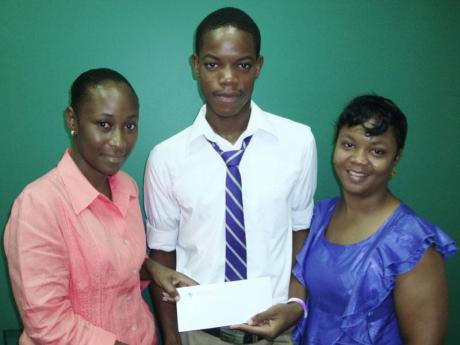 Harrison nailed nine distinctions and a credit in the 10 subjects he sat, to be the second recipient of the Jamaica Taekwondo McKay Security CSEC Scholarship, which was also won by a Kingston College student last year, Shamar Morgan.

Daron, who missed out on 10 distinctions after getting grade two in Spanish, ticked off grade ones in the tough sciences - physics, biology and chemistry - in addition to mathematics, English language and literature, information technology, geography and social studies.

The 17-year-old excelled academically, earning a full scholarship - books, school fees, lunch money and bus fare - while practising taekwondo, at times up to 8:30 at nights, in St Andrew before making his way home, by bus, to Eltham View in Spanish Town, St Catherine.

He's not the product of a prep school, nor is he from a well-to-do household. His father, "the breadwinner", he said, works overseas. Daron attended Harbour View Primary and lived in rural St Andrew, Bull Bay, before his parents moved to Spanish Town to provide him and his two brothers with "a better environment".

Daron has repaid his parents' investment in him, making it easier for them to focus financially on his siblings' education.

The scholarship is open to participants in the Jamaica Taekwondo McKay Security high school taekwondo programme and is awarded to the student with the top passes.

The scholarship started in 2005 as Jamaica Taekwondo and McKay Security's effort to promote taekwondo within schools as a medium to reduce violence and promote sports while encouraging academics.

"It is really good because we're not from (a family with) money. It really does well for him. We really appreciate and are thankful for it,'' said Daron's mother, Annmarie Blair, whose voice hit a crescendo when asked about her son's work habits.

"Oh, my! Words can't explain how this child worked. He has been working, not really for a scholarship, but consistently doing well from grade one to now.

"It's not like he was doing it for a scholarship, he tells himself he's a number-one child. He doesn't take failure for an answer. He's a consistent child," she beamed, the only way a mother could.

Blair said she provides support for Daron, giving him no excuse to slack off.

Jason McKay, CEO of McKay Security and Jamaica Taekwondo representative in charge of the high school programme, said he was really impressed with Daron's grades and pointed to how good parenting can yield success despite adverse circumstances.

"Nine ones and a two, one really couldn't ask for more, and it just goes to show the importance of strong parenting, good teachers and the proper use of a young man's time," he said.

McKay said the programme constantly monitors each child's grades and was happy to point out that the Jamaica Taekwondo students are consistent high performers.

For young Daron, the University of the West Indies (UWI) and a career in medicine beckons.

"When I am finished with sixth form at KC, I'd like to do medicine at UWI. I really like it. It's very interesting. I really have a knack for the sciences.