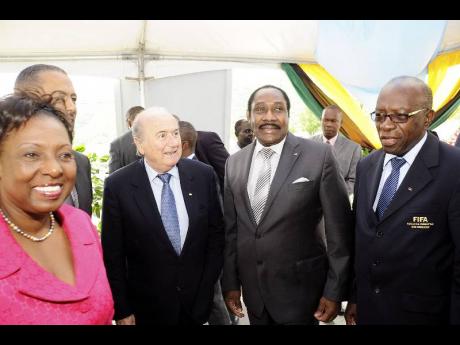 (From left) Jamaican Minister of Sports Olivia Grange, FIFA president Joseph 'Sepp' Blatter, JFF president Captain Horace Burrell and Austin 'Jack' Warner, president of CONCACAF and the CFU, as well as FIFA vice-president, stand side by side at the inauguration of the JFF technical centre, at the University of the West Indies on Monday. - Rudolph Brown/Photographer

FIFA president Joseph 'Sepp' Blatter says CONCACAF's push to gain a fourth automatic qualifying spot at the 2014 FIFA World Cup in Brazil is commendable, but it may be difficult, given the demand of other confederations.

"It will be a struggle, but the hope is that we will find a diplomatic solution that will allow all confederations to be represented proportionately to their past performances at the World Cup," he said.

"Congratulations to CONCACAF as over the years you have performed creditably well on the international stage. However, with other confederations making arguments for a spot, there is good competition," he added.

Blatter was responding to questions at a media briefing, following Monday's official launch of the FIFA Goal Project, the Jamaica Football Federation (JFF) Centre of Excellence at the University of the West Indies.

CONCACAF, the governing body for the sport in North, Central America and the Caribbean, presently has three and a half qualifying spots to the World Cup.

Three are automatic spots and the other represents a play-off against the fifth qualifier from CONMEBOL, which is the continental governing body in South America.

CONCACAF is making the bid on the grounds that CONMEBOL will have five spots, as Brazil are already guaranteed a place, as hosts of the quadrennial tournament.

The question was also posed to Blatter if he would personally back CONCACAF's bid for a fourth automatic spot at the World Cup. However, the affable president, who has been at the helm of FIFA since 2003, declined to commit.

CONCACAF president, Austin 'Jack' Warner, who was also at the official launch, said he would continue lobbying for the spot, as the confederation's performance over the past couple of FIFA World Cups speaks volumes to the potential of countries in the region.

"It is something that we in the region will be pushing. I think we have done creditably well at World Cups to demand a fourth full spot," said Warner, who is also a FIFA vice-president and head of the Caribbean Football Union.