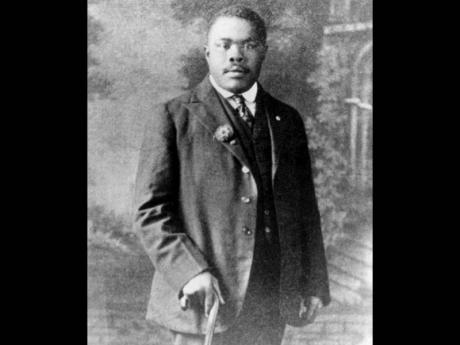 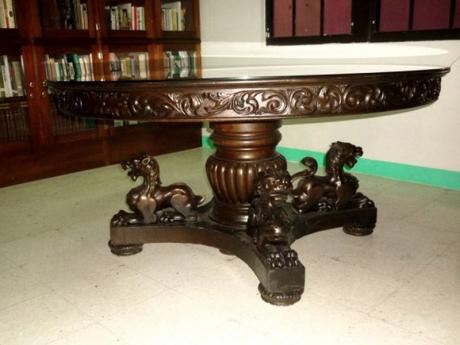 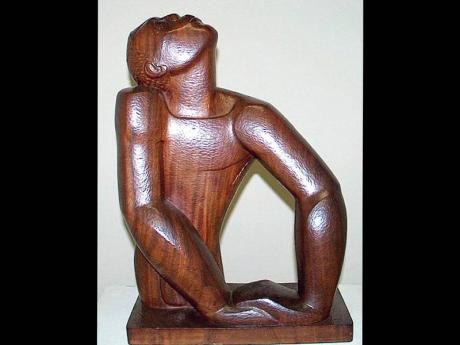 He left Jamaica in the 1900s and eventually ended up in Harlem, New York. Garvey became a leader of the Harlem Renaissance but, hounded by United States law enforcement, he was imprisoned on dubious fraud charges, then deported to Jamaica.

In 1914, he started the Universal Negro Improvement Association (UNIA), in Jamaica. The UNIA, which grew into an international organisation, encouraged self-government for black people worldwide; self-help economic projects and protest against racial discrimination.

He died from a stroke in London in June 1940. His body was exhumed and shipped to Jamaica in November 1964. He was also officially recognised as a National Hero.

This cane, pictured in a photograph of Marcus Garvey taken in the 1920s, belonged to him until the time of his passing in London, England in 1940. It was returned to Jamaica in the 1970s.

Marcus Garvey was an avid collector of artwork and antiques. This beautiful handcrafted mahogany table was built in 1812. It was probably acquired by him during the late 1920s; and featured as one of the pieces of furniture at his home, Somali Court, on Lady Musgrave Road. The table was recently restored by Liberty Hall through the Institute of Jamaica.

Marcus Garvey is widely admired for his journalistic prowess. Throughout his life, he edited eight periodicals. The last of these was The Black Man monthly magazine which began publication in 1933 and ended in 1939 while Garvey lived in London. The magazine carried news on international affairs significant to the lives of people of African descent, reported on the activities of the Universal Negro Improvement Association and published literary compositions by Garvey and his readers. The front-page of this issue of The Black Man featured a poem written by Marcus Garvey titled: 'The Rise of the Negro'. Donated to Liberty Hall by Balford 'Ras Balie' Reid.

Downtown Kingston is a place of rich history. It was the centre of activities, businesses and urban sensibilities in pre-Independence Jamaica and though its face may have changed somewhat over the decades, those pivotal roles of historical, political, social and cultural have not changed.

A prime example awaits you at the end of King Street, down at the Kingston Waterfront - the Negro Aroused monument done by Edna Manley. The large figure of the black man in repose gazing skyward, supporting himself on a powerful arm is reminiscent of a person seeking answers from a divine or heavenly source greater than him, the capture of a moment of self-actualisation.

However, housed in the permanent collection of the National Gallery of Jamaica, also situated downtown, is its predecessor - the original mahogany sculpture created by Manley in 1935.

The monument at the Kingston Waterfront was commissioned over 40 years later in 1977, as a tribute to the struggles and developments of labour movements in Jamaica. The mahogany sculpture provides a more intimate study of the Negro, not only in terms of concept, but also in the sectional masses of the limbs and the very colour of the mahogany. According to the artist, the wood's natural colour lent itself as the complexion of the majority of the Jamaican people.

Around the time of the sculpture's creation, pre-Independence Jamaica was going through its teething pains as a British colony at the early stages of its journey to become an independent sovereignty.

There was a general discontent among Jamaicans at the time due to factors such as a failing banana industry, falling sugar prices, problems within the international economy and overall poor social conditions.

Jamaica was not alone in its struggles as labourers of other colonies of the British Caribbean were suffering from similar challenges. The growing problems fuelled riots and surges in violence. Upcoming Jamaican leaders such as Norman Manley and Alexander Bustamante began to encourage a feeling of nationalism and solidarity to counter the discontent, through endeavours such as establishing our two major political parties and instituting the trade unions.

Manley captured the mood of the black populace of the time, creating a visual icon for the awakening of the consciousness of the people. Today, this symbolic image is utilised in posters, stamps and other media. It communicated a message of hope and perseverance for Jamaicans then and the same sentiments ring true to this day as the monument, and we as Jamaicans, continue in our awakening for years to come.

The worship of physical objects in a religious context has a long-standing history that predates some of our major world religions. Such practices are usually associated with ancient and prehistoric civilisations or societies.

In Jamaica, our pre-Columbian predecessors, the Tainos, have left evidence of their religious rites and customs in religious objects or artefacts that have outlived the individuals who fashioned and revered them hundreds of years before.

Perhaps the Taino artefacts of the greatest religious significance are the zemis. Zemis were usually fashioned from woods like mahogany or ceiba (silk-cotton tree). A zemi was more than just a representation of a deity, god or spirit to the Tainos. In fact the zemi was the actual spirit, believed to be able to move about freely during the night in the absence of human sight. Offerings of food and water were also made to the zemi. The zemis of the Jamaican Taino, so far, have been discovered in caves in the southern and north-central areas of Jamaica.

Caves were centres for the religious practice for the Tainos who believed them to be transit points between the supernatural and the human world, where some spirits also resided, taking the forms of the various animals that live there, for example, bats.

One zemi was discovered near the small village of Aboukir in St. Ann. It depicts an anthropomorphic figure (a figure with human characteristics) surmounted on a staff. Up to this time, it is the only one of its kind found in Jamaica, and is currently on display at the National Gallery of Jamaica.

The eyes, nose and mouth, now empty spaces, were possibly inlayed with materials such as shell or gold. It has thin arms folded to the chest and the legs are bent with pronounced genitalia. The zemi is possibly representative of Yœcahu or Youcahuna, the supreme Taino deity.

It is speculated that this zemi was used as a ceremonial staff for the cacique, or chief, as a symbol of his status. There are written accounts of Columbus' arrival on the shores of Jamaica in 1492, he and his crew were greeted by Tainos carrying staffs similar to this one.

The Tainos were excellent craftspeople in not only wood, but stone, shell and bone. They were also expert potters and weavers.

It is interesting to note that Tainos shared similar beliefs about the interaction of the spirit world and the human world with our African ancestors and these are still present today in our folklore. One such belief is the inhabitation of spirits in trees. Today, many Jamaicans believe that 'duppies' live in cotton trees and Jamaican children are often warned to stay away from such trees or risk being 'troubled' by an evil spirit. The Tainos also believed that spirits were present in the trees, especially the large ceiba or silk-cotton trees, such as examples found in southern parishes such as St. Elizabeth.

As there is no evidence thus far of Tainos that have survived beyond the seventeenth century in Jamaica, the only means by which to understand the history of our land before the arrival of the Europeans, Africans and other nationalities is through the discovery and preservation of such artefacts. As represented in our nation's Coat of Arms, their history as Jamaica's first known people is an accepted and respected part of our national heritage.