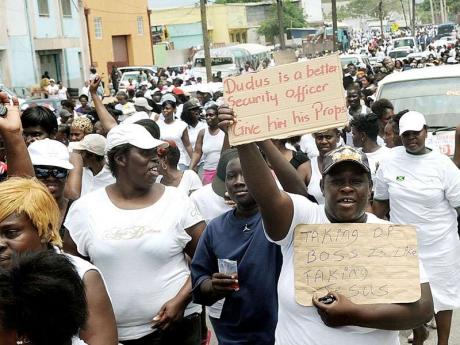 A supporter of Christopher 'Dudus' Coke holds a placard high as hundreds of demonstrators march along Spanish Town Road in May to demand that his extraditition hearing be scrapped. - Ian Allen/Photographer

Caribbean societies are reportedly being devastated by the highest rates of violent crime in the world. According to the United Nations, Bahamians, Jamaicans, Haitians, Puerto Ricans and Trinidadians are four times more likely to die by gun violence than a North American.

The region's political leaders are anxiously casting gangs as the new villains.

Although young men have long been recruited into gangs with support from local politicians, they are now being singled out as murderers, drug traffickers and, increasingly, terrorists. Fearful that local gangs are going global, the Caribbean is now at the centre of an international battle against organised crime.

Jamaica is a microcosm of the wider global war on gangs.

In May 2010, the Government's efforts to capture alleged gang leader, Christopher 'Dudus' Coke, led to the death of more than 70 people and the shutdown of the nation's capital for almost a week.

Behind the spectacular scenes of violence were long-standing allegations of state complicity in supporting gangs and systematic neglect of poorer communities.

Jamaica's Government claims that the criminal gangs pose a clear and present danger to national security and its tourist-reliant economy.

The Government has reported a fivefold increase in gang prevalence and a near doubling of murders over the past decade.

Public officials are using this evidence to justify aggressive pacification of the gang menace.

Historically, however, such tactics have seldom yielded the desired effect, instead they make things worse.

Academics such as Professor Anthony Harriott at the University of the West Indies argue that the sheer diversity of Jamaican gangs warrants a more sophisticated approach.

At one end of the gang spectrum are small, poor, and loosely organised groups of adolescent boys who believe they are defending their communities. They are seldom motivated by profit or power.

Social workers in Kingston have pointed out how amenable these so-called gang members are to social-welfare interventions.

Muscular crackdowns may, in fact, be driving some of them into the hands of the dons, or drug barons.

At the other end are the larger, more organised gangs that are involved in more sophisticated black market activities.

Some of these gangs have long-established ties with the country's politicians. They also have the resources to bribe - or directly challenge - Jamaica's police and armed forces.

Many also supply the pistols and assault rifles that smaller gangs use to such devastating effect.

In July, Jamaica's Parliament enacted legislation - described by one legislator as "draconian, but necessary" - allowing persons charged with serious gun and drug-related offences to be held for up to 60 days without trial.

A close inspection of these actions reveals that while they may successfully fill prisons with young men, they do little to deter criminal violence.

The militarised response of the Jamaican Government to gangs reflects, to some extent, the fear and frustration of the country's middle and upper classes.

For the country's political elite, it is easier to support punitive measures to control deviants than challenge the deep-seated political corruption and neglect that facilitated the emergence of gangs to begin with.

For a brief moment it seemed that Jamaica might adopt a different approach to containing the gang threat.

Over the past 12 months, civil groups have been urging greater accountability in the distribution of state contracts - many of which were awarded to alleged gang leaders like Coke.

The civil groups have also been clamouring for transparency in the financing of political parties - much of which is believed to come from criminals. But these calls started dying out a few months ago.

Notwithstanding courageous scrutiny of the Government's repressive tactics, most citizens are weary and and are more focused on the daily tasks of survival.

Though widely recognised as a scourge across the Caribbean, there is no clear strategy for dismantling the region's gang ecosystem.

The Caribbean Community (CARICOM) is mandated to implement a regional crime and security agenda, but a plan has yet to emerge. The slow pace of progress reflects, to some extent, wider challenges of regional co-operation by Caribbean states.

To wit, the CARICOM meeting of Heads of Government in July ended with few concrete plans for collectively addressing the pernicious linkages between drugs, corruption and gangs.

The Caribbean Community has also looked to the US for support.

The current effort is based on the ongoing US$464 million Mérida initiative under way in Central America and Mexico.

In the Caribbean, the focus is on 15 targeted states believed to be succumbing to fragility, if not outright failure.

Described by the US Secretary of State Hillary Clinton as "a response to increasing rates of crime and violence in the region", the effort is clearly motivated by the region's function as a global trans-shipment hub for narcotics,

The outcome of Jamaica's latest round of anti-gang efforts will be something of a canary in the mine for the rest of Caribbean.

With Jamaica's Prime Minister Bruce Golding recently assuming the chairmanship of CARICOM, efforts at home will be seen as a showcase for other countries in the region.

Moreover, the US will be monitoring the situation closely to be sure its dollars are saving lives at home, and perhaps also in the Caribbean.

Since the pacification of Tivoli Gardens, there is quiet hope that the future may be different.

Jamaicans are right to demand meaningful change, accountability and a change of strategy in the country's struggle with gang violence.

If these efforts are to be successful, they will need to focus their attention on the larger and more sophisticated gangs.

If they want to make durable improvements, Jamaican authorities would do well to introduce more transparent oversight over the issuing of service contracts, promote tangible opportunities for marginalised youth and encourage energetic civic action to keep authorities accountable to the citizens.