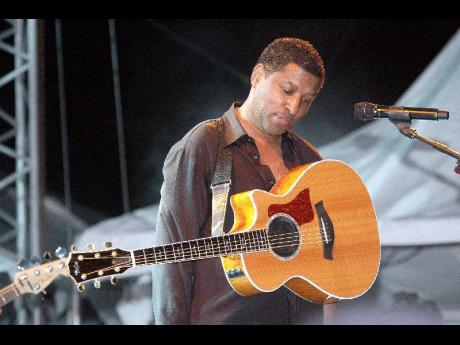 Babyface with guitar as he performs.

In 2007, music instructor Dean Barnett started a band as part of a social outreach project for children attending high schools in Kingston's inner cities. That band - The Silver Birds Steel Orchestra - has now blossomed into an award-winning squad of 40 talented musicians and performers.

Their performances are usually constituted by an array of visually stimulating costumes, matched with beautifully played instruments and enhanced by creative choreography. And, they play music from several genres. Accompanying the musicians is an energetic dance group that performs a variety of acts including break-dancing, reggae dancing, African dancing and much more.

Silver Birds has been so outstanding that in less than two years after being formed it was named Band of the Year by Television Jamaica and won gold medals at the World Championships of Performing Arts in Los Angeles, California.

Jamaica will get a chance to see more of this special group when they perform at a concert featuring Kenneth 'Babyface' Edmonds, set for November 3, at the National Indoor Sports Centre.

The concert is being staged by United Way to raise awareness about the organisation and much-needed funds.

This is yet another well-deserved opportunity for this talented band of youngsters.

"We are more than happy to be graced with the opportunity of entertaining and sharing the stage with the world-renowned Babyface," said Barnett.

"Babyface has been a household name to the Jamaican population for many years and still hasn't lost its value. It is nothing short of an honour to be asked to perform at this event along side such reputable entertainers."

Silver Birds have been rapidly developing a reputation of their own. Their unique blend of steel-pan music and choreography has caught the attention of top local and international corporate organisations including Digicel, Scotia Bank and the United States Embassy, for whom they have performed. They have also performed for Playboy's Hugh Hefner; and diamond-selling Jamaican star Shaggy was delighted to have them perform on his mammoth benefit concert on the lawns of Jamaica House.

The band has also performed in support of entertainers like Beenie Man and Etana at a concert held for employees of the United States Embassy.

At the Babyface in Concert event Barnett says patrons will see them at their best, because they have additional motivation.

"The Silver Birds steel band is prepared to make our country proud and perform at its best to make sure the event is a success, as it is for a good cause," he said.