On the run! Unqualified driver of ill-fated JUTC bus absconds after fatal accident 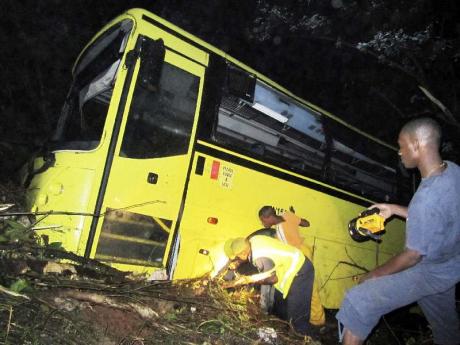 Wrecker crew attempts to pull this Jamaica Urban Transit Company bus out of the precipice into which it fell with passengers \along the Faiths Pen main road in St Ann last Friday night. - Contributed

THE Jamaica Urban Transit Company (JUTC) bus driver being sought by the police for the Faith's Pen crash last Friday night that killed a teenager and injured 39 other passengers is also wanted by his employer regarding a pending disciplinary hearing rendered him ineligible to drive the bus.

Reginald Allen, the JUTC's corporate communications manager, revealed that the driver was to face a disciplinary committee for matters relating to his driving. But, he refused to say anything more about the situation.

"That is an internal matter, but it is obvious that it was not something good," was all Allen was prepared to say about the pending disciplinary matter.

However, the state-owned bus company's spokesman was adamant that the driver should not have been around the steering wheel.

"He was awaiting a hearing," Allen pointed out. "He broke the rules and he will be brought to books for that. He went with his friend and somehow he ended up behind the wheel."

Allen confirmed that the bus was chartered by a church group who was on its way to a retreat.

A release issued by the Constabulary Communication Network (CCN) said that the Moneague police are seeking the driver of the JUTC bus for questioning in relation to the incident. "The driver, Jeremy Stewart, fled the scene of the accident," read a section of the release.

Allen said the JUTC is giving law enforcement all the help it can to find the driver who is on the run. Details on what caused the crash are still sketchy and the bus company's accident-investigation team is still trying to put the pieces together, he disclosed.

According to the Moneague police, about 8:40 pm, the JUTC bus was travelling along the main road towards Moneague and on reaching a section of the roadway, the vehicle reportedly plunged into a precipice.

A 16-year-old girl was pronounced dead at the Linstead Hospital and the other 39 passengers, who all suffered multiple injuries, were hospitalised in serious condition. The injured were assisted to the Linstead and St Ann's Bay Hospitals by motorists, personnel from the Moneague Training Camp and the Fire Brigade.