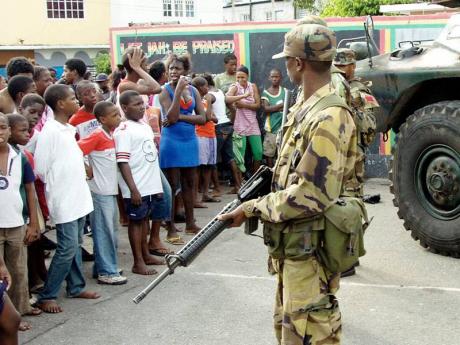 A Jamaica Defence Force soldier holds residents of Tivoli Gardens at bay after the fatal shooting of five men in January 2008. - File

Two Jamaica Defence Force soldiers who were charged this week in connection with the murder of one of the five men who were shot in Tivoli Gardens, west Kingston, in January 2008, have been freed.

Director of Public Prosecutions Paula Llewellyn offered no evidence against them when they appeared in the Home Circuit Court.

The soldiers, whose names have been withheld for security reasons, were charged following a coroner's verdict last month.

Llewellyn, in outlining the reasons for her decision not to prosecute the soldiers, said she reviewed the depositions and statements and the Crown was not in a position to mount a viable case against them. She said the Crown would not be able to challenge a claim of self-defence.

After the Crown offered no evidence, Supreme Court judge Ingrid Mangatal directed the 12-member jury to return a formal verdict of not guilty.

Defence lawyer Linton Gordon, who represented the soldiers, commended Llewellyn for her professionalism and her loyalty to duty and the Constitution. Jamaica Defence Force lawyers Lieutenant Colonel Patrick Cole and Captain Chester Crooks also appeared for the soldiers.

The members of the security forces had reported that they went into Tivoli Gardens in search of wanted men and were fired on. They returned the fire and five men were fatally shot.

Llewellyn said yesterday that there was clear evidence that Palmer was descending the stairs, firing at the members of the security forces and they fired back. When Palmer fell, the gun - a .44 magnum revolver - was seized. It was taken to the government forensic laboratory.

Would have to be tried

Llewellyn said had Tulloch been alive, he would have to face a trial with respect to the deceased Mitchell.

The jury had ruled that Inspector Linroy Edwards and Constable Neil Gordon should be charged with aiding and abetting murder in relation to Mitchell. Coroner Patrick Murphy did not issue a warrant for their arrests and Llewellyn said the coroner was correct because under the Coroner's Act, such a verdict was not open to the jury.

However, she said she reviewed all the material before her and found no cogent or credible evidence pointing to any criminal breaches against the two policemen.

Llewellyn said she was guided in her decision by legal authorities which state that it cannot be accepted that a police officer should not be charged and prosecuted for murder if a prima facie case is not made out. She said it cannot be in the public interest that a police officer should be treated differently from a civilian in such matters and the same principle applied to a soldier.