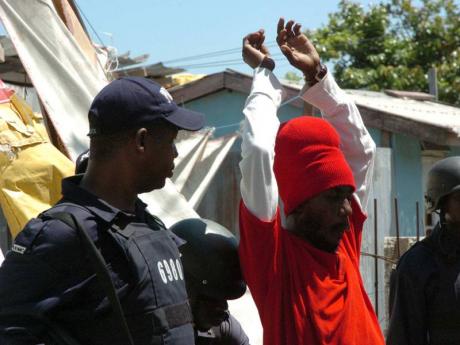 Deejay Miguel 'Sizzla' Collins holds his hands high as he is escorted by the police who seized 13 high-powered weapons and several rounds of ammunition in Judgement Yard, August Town on March 17, 2005. - FILE

By his third Xterminator label album in 1994, Luciano had made significant headway with the title track One Way Ticket, a bigger hit in the UK than it was in Jamaica. Then, in early 1995, the double-sided single Your World and Mine and It's Me Again Jah, the latter soon becoming Luciano's signature song - sent the man who became known as 'The Messenger' into the musical stratosphere.

It's Me Again Jah was included on the 1995 album Where There is Life, which was chock-full of hits. He did Messenger for Island Records two years later, and Sweep Over My Soul, just before the turn of the millennium, led by a slow, moving reworking of the Christian hymn of the same name. Combined, the output made Luciano a revered performer, commanding respect in toughest of dancehall settings, in addition to the 'culture' shows.

In addition, Luciano's performances were regularly prefaced with Bible readings, the dreadlocked singer always kneeling prayerfully at the start of It's Me Again Jah.

Sizzla, Luciano's then Xterminator stablemate, also made a huge impact in the 1990s, the single White God alerting all to the presence of rare talent before the albums Praise Ye Jah (Xterminator) and Black Woman and Child (Digital B) were released simultaneously in 1997. Those albums confirmed a phenomenal lyricism and unforgettable singjay style, from the respective title tracks through One Away and No Time to Gaze on Black Woman and Child, as well as Homeless and Dem a Wonder on Praise Ye Jah.

Many other albums followed, admittedly of varying quality, with Da Real Thing (again with producer Bobby Digital in 2003) a strong return to Sizzla's roots.

However, post-2000 Sizzla made a dramatic lyrical switch which gained him 'ratings' in hardcore dancehall, but alienated some loyal 'culture' fans. Blatant sex (Pump Up Har) and violent lyrics (Gunshot and Big Long Gun) crept into his output, and Sizzla often appearing on stage at smaller sound system-based events with the Bounty Killer-led Alliance.

Then came a huge gun find at Judgement Yard, August Town, St Andrew, on Thursday, March 17, 2005, when 13 high-powered weapons, ballistic vests, ammunition and gun parts were found by the police. Sizzla was among more than 30 persons arrested in the police operation and, although never charged, coupled with his lyrical diversion, his image never fully recovered from the illegal weapon find at what the police said was called 'Sizzla Corner'.

Luciano's brush with the law also came through guns, those of Andrew 'Conqueror' Senior, a gunman who was killed at Luciano's St Andrew home in March 2009. Luciano, who was not at the premises during the shooting, was charged with harbouring a fugitive. The case has taken a while to go through the system and up to late August this year, Luciano was reported as maintaining his innocence. However, his fall from grace has been evidenced by a notable lack of presence on Jamaican concerts, where he was once an indispensable part of the line-up.

In 1998, Jah Cure was one of the many Rastafarian voices finding space in an ultra-competitive dancehall arena, his Kings in this Jungle combination with Sizzla a striking record, and his voice memorable. Soon, though, he was in prison, convicted on gun and sexual assault charges. Jah Cure's popularity in dancehall circles gathered momentum with persistent calls to free him, with the records he recorded while incarcerated (notably True Reflections) gaining widespread popularity.

Although Jah Cure has been out of prison for some three years, it is doubtless his prison stint has dimmed his star in some quarters.

Earlier in the 1990s, allegations that a shotgun was involved in Garnet Silk's fiery death in December 1994 stunned aficionados of the peaceful Rastafarian singer. And Terror Fabulous, who moved from the sexually explicit Position and rude boy song, Gangster's Anthem, to the spiritual Jah Works, has had mental health issues which have landed him in trouble occasionally and also cut a very promising career short.

However, there are those Rastafarian performers who started in that era, among them Silk's Christian Souljah outfit compatriot Tony Rebel and Bushman, who have come through with their reputations intact.