Chantal gets up to mischief on final night 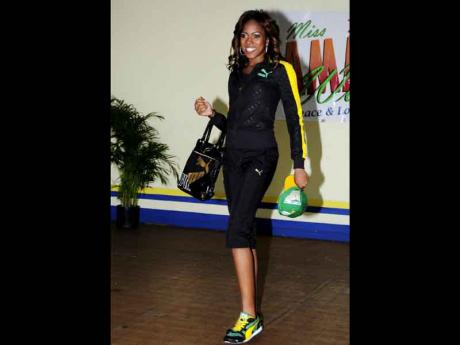 Chantal Raymond has kept Jamaica in tune with what has been happening in Sanya, China, over the last month. Read now her last posting after the competition

Hi Jamaica. First, I want to thank everyone who supported me throughout my Miss World adventure and tuned in to watch me last Saturday.

Some contestants brought large camera crews to Sanya to record what happened before and after the competition. Since we weren't so privileged, let me tell you what happened.

After the competition, we changed into evening dresses and went to unwind with family and friends at the coronation after party. I met up with my friend Simone Poot, who you may remember as a runner-up in the Miss Jamaica World 2010 competition.

Simone and I orchestrated a plan where she would walk into the party as if she were also a Miss World contestant. That way, she could sit with me in the VVIP section. Our plan must have really worked because photographers swarmed us thinking we were both 'Misses', taking tons of pictures of us as we walked, ate, and laughed.

After Simone left, I went to spend time with a friend of mine in her hotel room. We somehow ended up having a second after party, as our numbers moved from two ladies to 10 in a matter of minutes. Then, one of the girls yelled downstairs to some boys passing by and told them to join the party.

The boys turned out to be harmless 18-year-olds from Australia. They were also younger than most of the ladies in the room, but I think the contestants present were just happy to see members of the opposite sex after being around 120 ladies for one month.

Security went frantic and immediately went on a hunt to find the male guests in the women-only building. I decided to take the young boys arrival and the security mayhem as my exit cue and let the young ladies enjoy the rest of their evening.

This incident, however, is not the first time the ladies went a little boy-crazy on our China trip. During week three, we met our choreographers for the Chinese Fashion Show. Some of the ladies developed immediate crushes on these modernly dressed Chinese men in their late 20s to early 30s. We were also told that these men choreographed the opening ceremony for the 2008 Beijing Olympics.

After meeting our choreographer, one of my European friends jokingly said she was going to tell her mother that she had fallen in love with a Chinese guy and had decided not to return home. She then joked that when her mother asked what she liked most about him, she would respond, "Well, he speaks English." Then, we laughed at the fact that after being secluded in China for one month, many of the ladies had re-evaluated their dating standards.

These are the funny moments that made us laugh together and bond as friends.

For this reason, the day after the competition was quite sad. The buses departed for the airport one by one as the contestants hugged and cried. They were sad at the possibility of never seeing friends that they had grown so close to during the pageant.

My partners in crime, Miss New Zealand and Miss Cayman Islands, left early in the day, but I was not as sad to see them go because I know I will see them again.

All in all, what I will miss most are the friendships. I had a wonderful time, and only had two disappointments.

First, due to a last-minute change in the judging rules to not allow poems or drama in the talent competition, I was disqualified from competing for talent. This was shocking to everyone because my dramatic monologue was considered a favourite by the other ladies during the talent auditions, which were held two weeks prior to this rule change.

Second, I was saddened to find out that due to a camera malfunction, I was one of five contestants that did not receive a close-up when our countries were called during the Miss World Live broadcast.

Other than that, I made many friends from all over the world, ate desserts every day without gaining weight, got to live in China for one whole month, and represented my country to the fullest wherever I went. Therefore, I would call my China trip a smashing success.

Thanks for joining me on my journey.