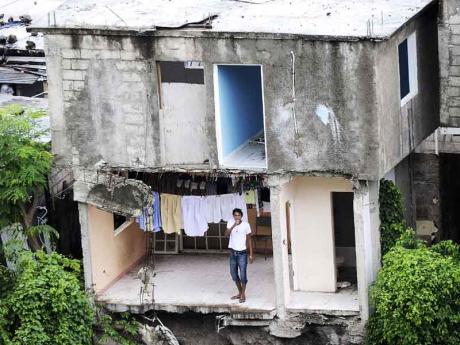 A young man brushes his teeth in a house which now sits on the edge of the Hope River at Tavern Crescent, St Andrew. The house was damaged in Tropical Storm Nicole in September. - Ian Allen/Photographer

SOME CORPORATE Area residents are counting their blessings, having been spared a direct hit from Hurricane Tomas, which was a tropical storm when it passed the shores of Jamaica Thursday night.

Valentine Dudney of Tavern, St Andrew, told The Gleaner that community members gathered anxiously to see what Tomas would have done to their houses.

"All a wi stand up outside and watch because we wanted to see what would happen so that we could get out of here," he said.

"We have to thank God, because we couldn't manage another hit. Nicole did us too bad," Dudney added.

It was a similar situation for residents of Kintyre who feared their already battered community would be destroyed by the showers.

A few community men, who were seen recounting the experience of Nicole in the community, were also thanking God it wasn't the same situation with Tomas.

They, too, said they watched feverishly throughout Thursday night, as Tomas dumped showers in their area, to see what the outcome would be.

"Me did think something would happen due to what happened with Tropical Storm Nicole, but me realise that it wasn't that bad as Nicole," Wayne Lumley said.

One other member, who did not give his name, said the people of Jamaica were tricked.

"Them know say no storm never did a come; a trick them trick we. Them want we fi buy up things even though them know say people no have no money," the community member said.

Border Avenue and other communities in Havendale, St Andrew, which were affected during Nicole only got minimal damage.

"We only lost some plants, so we have to give thanks, as the last time, we had it rough," a community member said.

Tropical Storm Nicole dumped several inches of rain on the island late September resulting in damage to several properties and the loss of more than a dozen lives.