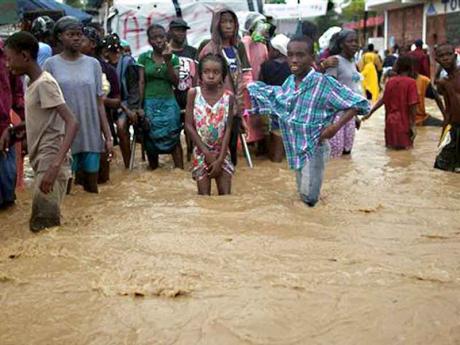 People stand in a flooded street during the passing of Hurricane Tomas. 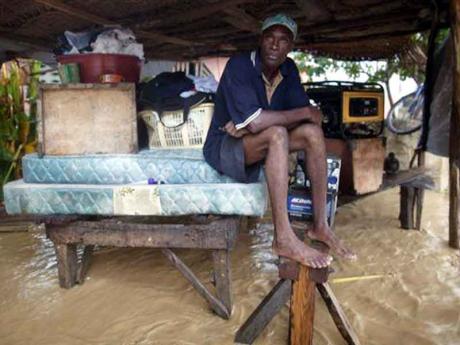 A man waits with his belongings in his flooded home. 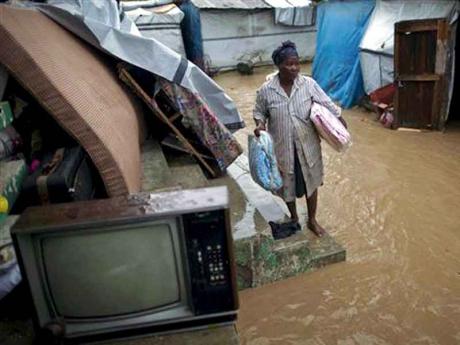 A woman waits with her belongings in a flooded camp for people displaced by the January earthquake during the passing of Hurricane Tomas in Leogane, Haiti, yesterday.
1
2
3

Hurricane Tomas flooded the earthquake-shattered remains of a Haitian town yesterday, forcing families who had already lost their homes in one disaster to flee another.

Driving winds and storm surge battered Leogane, a seaside town west of Port-au-Prince that was near the epicentre of the January 12 earthquake and was 90 per cent destroyed.

Dozens of families in one earthquake-refuge camp carried their belongings through thigh-high water to a taxi post on high ground, waiting out the rest of the storm under blankets and a sign that read "Welcome to Leogane".

"We got flooded out and we're just waiting for the storm to pass. There's nothing we can do," said Johnny Joseph, a 20-year-old resident.

The growing hurricane with 85mph (140kph) winds, was battering the western tip of Haiti's southern peninsula and the cities of Jeremie and Les Cayes.

One man drowned while trying to ford a river in an SUV in the rural area of Grand-Anse, said civil protection official Pierre André. The hurricane had earlier killed at least 14 people in the eastern Caribbean.

In the capital Port-au-Prince, still scarred from a devastating January 12 earthquake, hundreds of thousands of homeless quake survivors huddled under rain-drenched tent and tarpaulin shelters in muddy encampments. The earthquake killed 230,000 people and left 1.3 million homeless.

Up to press time last night, there were no immediate reports of major destruction or mass casualties even though the United Nations Office for the Coordination of Humanitarian Affairs said the storm could have dealt a far worse blow.

The centre of the storm was about 140 miles (230 kilometres) west of Port-au-Prince, draping charcoal clouds over the city. Steady rain turned the streets of the capital into flowing canals that carried garbage through the city.

Farther north in Gonaives, a coastal city twice inundated by recent tropical storms, police evacuated more than 200 inmates from one prison to another.