Hurry with our bridge 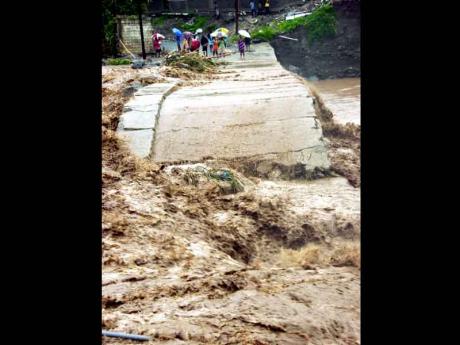 The Kintyre bridge washed away by flood waters on September 29. - Norman Grindley/Chief Photographer

More than a month after Tropical Storm Nicole dumped heavy showers in the raging Hope River, destroying the only bridge that allows vehicular access to the community of Kintyre and Hope Flats in East Rural St Andrew, Wayne Lumley said he is struggling to cope with the situation which has changed his life significantly.

He told The Gleaner that his car, which he operated as a taxi, was his only source of income but it is now trapped in the community causing him to be out of a job since.

"Is six weeks now me caah get fi work because me use me car fi hustle, and see the car dere stuck in the yard can't get fi move because the bridge broke down."

He said since he is unable to work, he is now not only unable to support his two children but he has to be dependent on others for survival.

"Me 16-year-old son a go take CSEC and a borrow me have to borrow the money to pay for the exams or else him wouldn't be able to take them cause me no have no money," Lumley lamented.

"Right now, I want a phonecard fi call me brother to get some money and I can't buy the card. That is how things bad with me," he added.

Lumley told The Gleaner that several persons whose vehicles were trapped across the river attempted to get out by driving though the gushing waters and have lived to regret that move.

"Some people try fi drive through the river and all it do is cost them because the water damage the car, so it end up costing them a lot of money to fix them vehicle," he said.

University of the West Indies professor, Ishenkumba Kahwa, who lives in Kintyre, has also called for a bridge for the residents.

"I think there needs to be a proper solution. Since Hurricane Ivan (2004) the bride was washed out. They filled it out and when the rain comes, it washes out again. We need a permanent solution for the bridge for the people. Thousands of people depend on it and over time they are punished," the professor said.

Tricia, a 20-year resident of Kintyre, said her community has waited for too long for a decent bridge.

"From the longest while I hear that they are going to bring a Bailey bridge but up to now, the Bailey bridge cannot reach. Everybody else they try to help out but what about us over this side of the river," Tricia questioned.

Lumley, meanwhile, is not very hopeful of a permanent fix. He says he has heard numerous promises about a bridge for his community. He also says he is tired of those promises and is yearning for that the day of having full access to the community, via a decent bridge, is not far away.