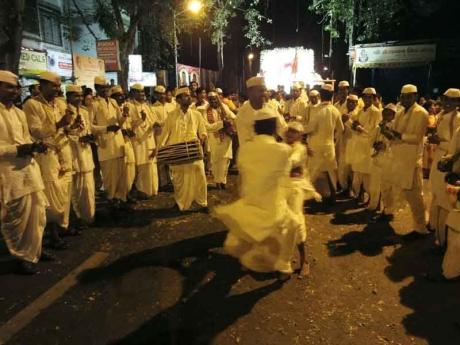 Dancers move to the beat of drums during the 11-day festival celebrating the elephant-headed god Ganesh. 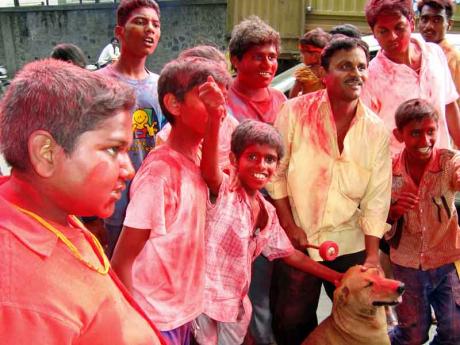 Indian celebrants covered in gulal, the red powder that escapes no one who dares walk the streets during Ganesh Chaturthi. 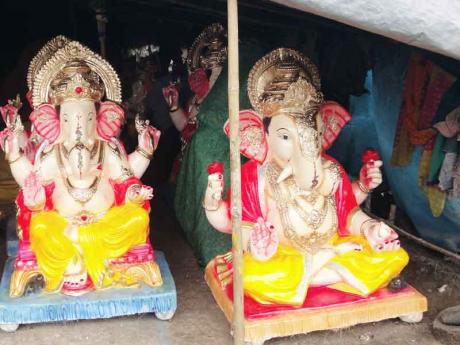 Thousands of Ganesh idols can be seen on the streets of Pune at the height of the religious festival. 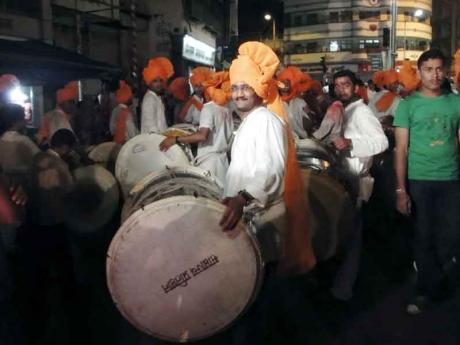 Drummers are part of the rich tapestry of the Ganesh festival. - Photos by Luis Jimenez
1
2
3
4

Perspectives from Pune: Impressions of India and Other Random Rants Pt 3

Exactly one week after I returned for my second tour of duty, the Ganesh festival started. In the Hindu pantheon of gods, Ganesh is the elephant-headed son of Shiva and Parvati. He is the god of luck, new beginnings, letters, learning and remover of obstacles, though he does place impediments in the path of those who need to be checked.

Every year, there is an 11-day festival honouring Ganesh called Ganesh Chaturthi. Pune, like everywhere else, is right into it. For months before the festival, artisans start creating thousands of Ganesh figures to be used in the festival. These idols can range from a few inches in height to well over 20 feet. They are made from plaster of Paris, and at the end of the festival they are immersed in the rivers which, for the believers, symbolises Ganesh taking away with him the misfortunes and bad luck of those who worship him.

Within the last week, life in the Ganesh tent factories has gone into high gear and the stockpiled figurines are now being painted, decorated and made ready to go out for the festival where they will be placed in positions of honour on temporary outdoor stages called Pandals or in people's homes. To say that they are literally thousands of Ganeshes of all sizes and colours in these makeshift tents does nothing to help you understand the magnitude of this undertaking, all of which is done by families who eat, sleep, live and work in these large tent factories.

During my time in India, I had become good friends with the young man Satya, who runs the fitness facilities at our hotel, and as fortune would have it, he and his family organised and paid for several large Ganesh floats and Pandals.

Being able to organise large Ganesh floats and several Pandals with drummers and dancers is by no means an inexpensive undertaking. To make this happen, they get their extended family involved in the effort because it brings them honour within the community and, more important, the blessings of Ganesh.

My friend Satya took me with him to meet his immediate family and cousins and to see their Ganesh statues and Pandals. When I saw how humble their home was, how graciously they opened it up and welcomed me, and how willing they were to share what they had, I felt honoured.

As I was welcomed and made to feel at home in a modest living room, I was offered modaka, which is a delicious treat made of a deep-fried outer crust of flour stuffed with a sweet, grated coconut filling. This is considered to be Ganesh's favourite food, so it is very popular during the festival.

After navigating through the streets, around vendors and vehicles, and pushing our way through the crowds who lined any open space possible, we finally arrived at the leading edge of the parade.At the front of the parade was a group of several hundred young boys dressed in traditional costumes wielding swords and shields.

Following them was a group of dancers who swung brightly coloured tassels as they performed intricately choreographed dance steps. The saffron-coloured tassels they waved around in sweeping flourishes matched their sashes and scarves, as they moved under the flickering glow of the buzzing street lamps.

And following the dancers were the drummers. The family had hired a group of professional drummers at the cost of 60,000 Indian rupees (US$1,500) for two hours. You felt the drums long before you saw the drummers. As we worked our way through the crowds, I could feel the low throb of the bass drums as the drummers pounded out a steady rhythm that seemed to rise from the road. The driving beat of the bass drums was overlaid by the intricate patterns of smaller higher pitched drums that were clearly being played by masters of the art.To say that the percussive patterns were impressive is an understatement of immense proportions. The drummers' rhythms served to stitch and hold together the entire festival. The rhythms dictated what the dancers and sword-carrying groups did, and their intricate and hypnotic beats heightened everyone's awareness and whetted their appetite and expectations because bringing up the rear in all his glory was the family's Ganesh Idol. Standing over 17 feet high and being pulled on its float by a tractor, this towering Ganesh idol required people to use bamboo poles to push the overhead electrical lines up and out of its way so that it could safely pass under them as it made its way slowly down the street.

After the first day of the celebration of the festival of Lord Ganesh, things quieted down for a while. The Pandals were still lit up at night with small groups of devotees tending to them and carrying on the ceremonies. As we edged ever closer to the 11th and final day, you could feel the pent-up anticipation and excitement smouldering beneath the veneer of daily life and drudgery. Newspapers ran headlines as to what streets would be shut down. It would probably have been easier for them to say which streets would have been open.

For all intents and purposes, the entire city shuts down and the streets are taken over by Indians intent on dancing, celebrating and covering themselves and anyone within reasonable running distance with a red powder called gulal.Gulal is bright red and has the consistency of finely sifted flour. You cannot run from it, hide from it or simply wipe it off. When mixed with sweat, it creates rivulets of bright red liquid that runs down your skin on to your clothes and keeps spreading.

Later, we passed several small groups making their way to the river to immerse their Ganesh idols.Some floats and idols are large and elaborate and are pulled by tractor or cows.

That night, Satya and his family took me into the heart of Old Pune where the 15km procession was taking place. I have experienced the crush and rush of the carnival crowds in Trinidad, Toronto, Washington, Notting Hill and New York, and that did nothing to prepare me for being one more speck in what was the largest moving mass of bodies I have ever seen. Dancers writhed in religious agony, without so much as a single alcoholic drink anywhere in sight.

Downtown in Old Pune at night on the final day of festivities is completely different to what I had witnessed earlier. These people are serious about Ganesh. Everything is lit up, music blares, crowds surge, sway and dance and spectators gawk. On side streets where there is breathing room, vendors hawk their wares, artists create designs on the pavement, holy men hover, and people move in a less frenzied pace. The crush of people outside the temple is kept moving by the police so each worshipper or sightseer is given enough time for a quick look and are then herded on to make way for the thousands still to come.Apart from the police, the temple is effectively surrounded by holy men who keep everything in order and tend to highly decorated cows that draw their own throngs of people all eager to see, and perhaps touch one.Annoying a holy cow may earn you a headbutt or a string of curses and a cane whipping if a policeman is close by. The celebrations go on all night until morning.After 11 days of celebration, delirious dousings with dye, debilitating decibel levels of drumming, the tent factories now lie empty, dusty and silent.

For yet another year, Ganesh is gone.