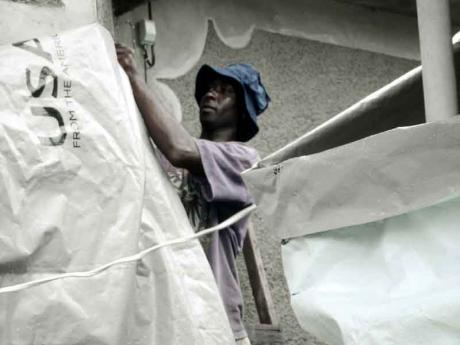 Lenroy Dennis of Bamboo River in St Thomas places a tarpaulin over his house to protect it from the heavy rainfall, which was expected to lash the eastern section of the island on Thursday. - Photo by Julette Bryan

SEVERAL RESIDENTS in St Thomas and Portland left nothing to chance on Thursday night, and moved into shelters in anticipation of Tropical Storm Tomas, which was expected to lash the eastern end of the island.

The eastern parishes were, however, saved from the wrath of Tomas, which was expected to dump several inches of rainfall, as it drifted past the north-east coast and headed towards Haiti and Cuba.

Shirley Nelson, acting parish disaster coordinator for St Thomas, said the residents were proactive. She noted that while there were no reports of flooding, the residents did not want to be caught off-guard and began moving into shelters as early as Thursday afternoon.

Hanif Brown, mayor of Morant Bay, said 60 shelters were opened across the parish, adding that 15 had 150 occupants. The others remained empty. He noted that the residents left all but one shelters yesterday morning.

Meanwhile, dozens of persons who occupied disaster shelters in Portland on Thursday night have returned to their homes. Only two of the 21 shelters remained open up to yesterday afternoon. The two shelters were occupied by 12 adults and eight children.

No reports of casualties

Disaster coordinator for the parish, Denise Lewis, said there were no reports of flooding, loss of life or property.

The disaster coordinator pointed out that the emergency operation centre was unable to get a accurate report from zone commanders and shelter managers in the Buff Bay and Rio Grande Valley, as phone lines were down.

Institutions in these parishes were ordered closed by the education ministry and the Office of Disaster Preparedness and Emergency Management.