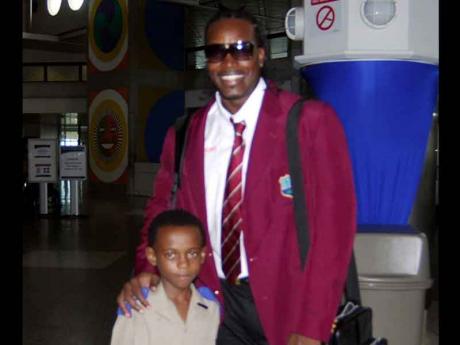 Chris Gayle shares a moment with a young fan at the Grantley Adams International Airport in Barbados on Thursday, prior to his departure with the first batch of West Indies players. - Contributed

Chris Gayle has pledged his support for Darren Sammy on West Indies' tour of Sri Lanka, which starts next week.

Following his decision to snub a West Indies Cricket Board (WICB) central retainer contract, Gayle was replaced as captain of the side a few weeks ago, when directors of the WICB chose to appoint Sammy to the position.

The left-handed opener is looking forward to the trip and indicated that Sammy can count on him for guidance.

"It will be a new role for Sammy," said Gayle before he departed from Barbados with the first set of players from the team on Thursday.

"I wish him all the best and we will all be there to rally around him and give him the necessary support."

He added: "He is the one who will have to take charge and lead from the front and we all know he is capable. We are all there to try and guide and help him."

Gayle hailed the pre-tour camp and felt it helped him to get his mind and body in shape for the rigorous trip to Sri Lanka.

"I'm feeling good and I'm hitting the ball really well," he said. "I hit a lot of balls in the camp and I'm looking forward to the tour.

"We are looking to have a winning tour. The preparations went really well and you could see everyone putting in the hard work. We know that nothing comes easy and we have to put in the hard work to achieve our goals."

He said: "It will be different conditions to what we are accustomed. We have a three-day warm-up game to get acclimatised and take it from there. As a team, we have been planning well and we believe we will do very well."

The second half of the West Indies team left yesterday for the tour, which includes three Tests, five one-day internationals and a Twenty 20 international.