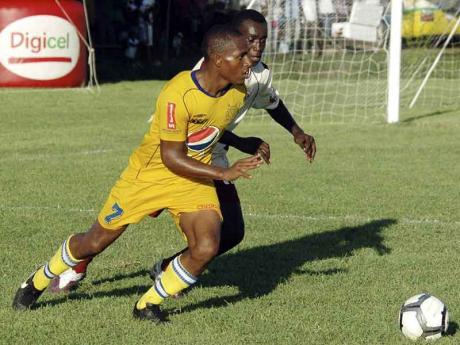 STETHS Denmark Gillings (left) hustles to the ball while being chased by a Paul Bogle High defender, during the Ben Francis KO final at Jarrett Park recently. Gillings, who scored in that encounter, will be among STETHS main attacking options when they face Clarendon College in what is expected to be a top inter-zone matchup this afternoon. - File

Champions St Elizabeth Technical High School (STETHS), who dropped points in their first-round 0-0 draw against Spaldings High, will be hard pressed to put their inter-zone campaign back on track this afternoon when they take on the highly fancied Clarendon College (CC), when action resumes in the 2010 ISSA/Pepsi/Digicel rural area daCosta Cup schoolboy football competition.

While STETHS are probably still on a high after recently winning the coveted Ben Francis Cup, the Donovan Duckie-coached Clarendon College, who started their inter-zone campaign with a 1-0 win against Grange Hill and are unbeaten in the daCosta Cup, have the capacity to take them down a few notches.

While a win for Clarendon College will put them within touching distance of the quarter-final round, a defeat or another draw for STETHS could derail their bid for the rural double (Ben Francis Cup and daCosta Cup).

Interestingly, while Clarendon College's only loss this season came in the Ben Francis Cup, STETHS are unbeaten in all competitions.

Among the other teams which will be involved in closely watched games - as they seek to establish a stranglehold in their respective groups - are former champions Rusea's and Glenmuir, who started their inter-zone run with 4-0 wins over Spot Valley and St Thomas Technical, respectively.

Rusea's will take on St Mary Technical in a Group Two game at Jarrett Park, while Glenmuir will battle Buff Bay in a Group Five fixture at Jamalco.

"While confidence is very high, we are nonetheless taking it one game at a time," said Rusea's coach, Anthony 'Follies' Williams, whose team is fast becoming one of the favourites for the title.

"We have put the win against Spot Valley behind us and our focus is now on getting another positive result against St Mary Technical," he added.

Marcus Garvey Technical, fresh from their first-round 3-0 win against St Mary High, should be in the fight of their lives when they come up against 2008 champions, St James High, in their top-of-the-table Group One clash, the feature game of the Jarrett Park double-header.

St James High started their campaign with a 2-1 win against Frome Technical.

"Having won at Frome, which has not been a happy hunting ground for us over the years, the confidence level in the team is now very high," said Hugh Solomon, coach of St James High. "We will definitely be going all out for a win against Marcus Garvey."

Former champions Garvey Maceo, who started their inter-zone campaign with a 1-0 win against beaten Ben Francis KO finalists Paul Bogle, but still seem to be searching for their best form, should have a tough task on their hands when they come up against Titchfield High in their top-of-the-table Group Six clash.

Titchfield started their inter-zone campaign with a 1-0 victory against Old Harbour.

Lennon, who started their campaign with a big 3-0 win against Manning's in their first-round Group Three game, had their second-round game brought forward by a day and were slated to play Munro College yesterday.

In the other Group Three game, the wounded Manning's will play Manchester High in the feature game of this afternoon's Frome Sports Ground double-header.

The first-round game between Manchester High and Munro, which was scheduled for Brooks Park in Mandeville on Wednesday, was rained out and will be replayed at a date to be announced by ISSA. These two teams are among the dark horses pundits feel could lift the title.

Manning's vs Manchester at Frome - 3 p.m.