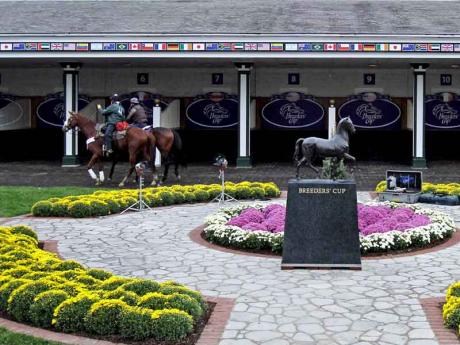 Horses walk around the paddock before a Breeders' Cup race at Churchill Downs in Louisville, Kentucky, yesterday. - AP

Freddy Head ran his hand through his thinning golden hair and chose his words carefully.

The jaunty French trainer, a pretty good jockey in his own right during his riding career, knows comparisons between his superstar mare Goldikova and unbeaten Zenyatta are inevitable.

They've dominated wherever they've run and done it in style. Both will pursue their own slice of history at this weekend's Breeders' Cup. Zenyatta will try to make it a perfect 20-0 with a run in the Classic, while Goldikova attempts an unprecedented three-peat in the Mile.

So who's better? Head doesn't think it matters.

"It's hard to say, it's different," he said. "All I can say is that Goldikova has been running against colts all her life. The best of our generation. Maybe it's not the same with Zenyatta. Let's say they're champions."

One more win, and both would become legends.

And while the five-year-old Irish-bred Goldikova won't have quite as many eyes on her this weekend as Zenyatta - who made her first appearance on the dirt under the twin spires Wednesday in front of dozens of cameras - that doesn't mean she's any less of a diva.

"She's amazing," said Hall-of-Fame trainer Bob Baffert. "She's just as big a star as Zenyatta with what she's accomplished. She goes all over the world, beats the boys."

And does it time and again. Goldikova has a European-record 11 Group 1 victories, including seven over the boys. Zenyatta, by comparison, has raced against colts just once.

"I'm just tired of looking at Goldikova's (butt)," said Richard Hannon Jr, who will send Paco Boy out in hopes of ending Goldikova's stranglehold on the Mile.

Too bad. It's usually the only view she offers at the finish line.

Goldikova is a heavy 6-5 favourite in the $2 million Mile, where she'll break from the 10th post in the field of 11 horses.

Head says she's just as good now as she was two years ago, when she edged Kip DeVille to take the Mile at Santa Anita, a win she backed up last fall with a mad dash in the final yards to slip by Courageous Cat.

She's returned to America once more to make a run at history, the standard-bearer of a strong European contingent that is looking to prove the success it enjoyed during the last two years in California isn't a fluke.

European horses won 11 races during the Breeders' Cup's two-year run at Santa Anita, a number aided in part by the track's synthetic surface, which encouraged a record number of European entries.

The event is back on a more traditional track this time, though this year's crop of European contenders could be the best it's ever brought to racing's biggest weekend.

Workforce will attempt to become the first horse to capture the Arc de Triomphe and the Breeders' Cup Turf. Midday is back to defend her title in the Filly & Mare Turf, part of a group of 24 foreign horses ready to take on America's best.

"We haven't got any better left at home," said Alastair Donald, director of the International Racing Bureau.

Churchill Downs, however, hasn't been kind to European horses during the event's previous six visits to the track. European entries have won just nine of 44 races in which they've entered during the Breeders' Cup's run at the home of the Kentucky Derby.

Yet, Head isn't a stranger to the winner's circle here. He won the Breeders' Cup Mile in 1988 aboard Miesque. More than 20 years later, he's back with a horse every bit Miesque's equal.

He admits there's something a bit "unreal" about his connection with two of Europe's greatest Milers. He doesn't have a favourite between the two, but says Goldikova has become a member of his family.

"She's got that tough character and that's why she's so good and in the race she doesn't want to let another one go by," he said. "She just fights."

And she usually wins, though she could face the toughest test of her career in what may be her final race. Paco Boy, Gio Ponti and Proviso will be among the group looking to send her into retirement with a loss.

Head believes the US-based horses will have a slight advantage when the gate opens on Saturday afternoon.

"We lose a little thing by travelling," he said. "You have to be 100 and something percent to be at the top here. But Paco Boy is a very, very good horse, no doubt. We've beaten him every time, but it's close. We need everything in our favour.