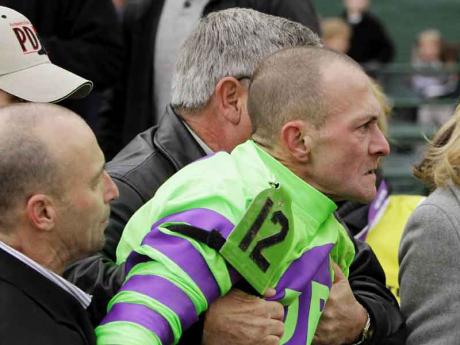 Jockey Calvin Borel is restrained after the Marathon race at the Breeders' Cup horse races at Churchill Downs yesterday in Louisville. Borel and Javier Castellano exchanged punches moments after the race, following a mid-race incident in which Castellano's horse Prince Will I Am ran into the path of Romp and Martin Garcia. Garcia was able to stay on top of his horse but also impeded Borel and A.U. Miner. - AP

It was the first Breeders' Cup win for both Theriot and trainer Bret Calhoun. The owners had to pay a $90,000 supplemental fee to get Dubai Majesty into the race.

Awesome Feather outlasted R Heat Lightning in a two-horse race to the finish line in the $2 million Juvenile Fillies at the Breeders' Cup.

R Heat Lightning was second, followed by Delightful Mary and Believe in A.P.

Calvin Borel was back in the saddle for the first time since trading punches with fellow rider Javier Castellano in the winner's circle after the opening race. He was escorted to the paddock by several security guards.

He finished seventh aboard Tell A Kelly.

More Than Real survived an objection by Jose Lezcano, who was aboard Winter Memories and finished second in yesterday's race at Churchill Downs. After a review by the stewards, there was no change in the order of finish.

It was the fourth Breeders' Cup win for trainer Todd Pletcher and the 10th for jockey Garrett Gomez, who went down in a spill a day earlier.

Flay jumped up and down and yelled, along with his actress-wife Stephanie March, as his 2-year-old filly charged to the finish line. More Than Real paid $29.20 to win at 13-1 odds. She ran one mile in 1:36.61 to earn her first stakes victory.

Zenyatta could be getting her favourite beer straight from the tap if she wins the Breeders' Cup Classic today.

Guinness said yesterday it is offering a trip to Ireland and its famed St James Gate Brewery in Dublin for Zenyatta, trainer John Shirreffs and owners Jerry and Ann Moss if the 6-year-old mare wins at Churchill Downs to close her career with a 20-0 record.

Shirreffs is known to open a bottle of Guinness and pour it into a bowl for Zenyatta in the afternoon. He says she'll only drink the dark Irish stout with its creamy head.

Guinness brand director Patrick Hughes says the brewery will be raising a pint and holding its collective breath during the $5 million race. He reminds all thoroughbreds and the race fans who love them that Guinness is best enjoyed responsibly.