Beleaguered Rooney to spend week training in US 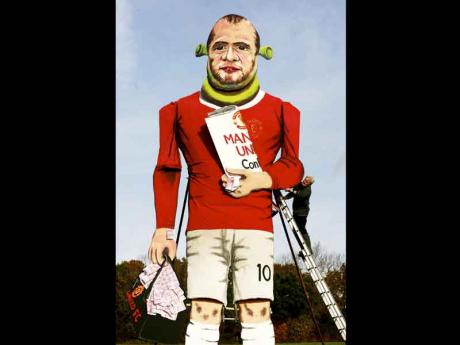 Artist Frank Shepherd puts the finishing touches on to a depiction of Manchester United soccer player Wayne Rooney, ahead of the Edenbridge Bonfire Society bonfire night display in Edenbridge, Kent, England, on Wednesday. Towns across Britain light bonfires and set off fireworks every year to commemorate the failure of a November 5 plot to blow up parliament and King James I in 1605. Bonfires are traditionally topped with an effigy of conspirator Guy Fawkes, but have been decorated with contemporary figures over recent years. - AP

Wayne Rooney has been lambasted by the British media, jeered by fans and this weekend will be burned in effigy in a southeast English town. No wonder the Manchester United striker is moving to the United States to recover from his latest injury.

Rooney was voted England's Player of the Year last season, but has gone from national hero to public pariah in three months, following a public wrangle over his future and newspaper allegations that he cheated on his pregnant wife with a prostitute.

Having persuaded Rooney to drop his threat to quit the club, United are sending the striker to train with sponsor Nike in Portland, Oregon, while he recovers from the ankle injury that has kept him out for three weeks.

"We feel it's in the best interests of him and the club to have a change of scenery for a while," United assistant manager Mike Phelan said yesterday. "He's had a lot of attention recently. We want to create an environment for him that will give him the best opportunity to be fit in a short space of time.

"He needs the conditioning and he can go there without the attention he'd get around here."

That attention has pushed Rooney on to the front page of Britain's tabloid papers and the sports pages at the back.

In the past week, papers have printed long-range photographs of Rooney and his wife on vacation in Dubai and reports that the couple's neighbours are unhappy at the noise made at a lavish first birthday party for their son.

That would have been a huge blow to United last season, when Rooney scored 26 of the club's 86 Premier League goals. But after a lacklustre World Cup, the 25-year-old Rooney scored only once in seven appearances this season before limping out of a 2-2 Premier League draw at Bolton on September 26.

Javier Hernandez has scored six times in his first 12 matches for the club and Dimitar Berbatov has struck six times in the Premier League alone for his strongest start in three seasons with United.

Manager Alex Ferguson has conceded that Rooney may not make it back into the team because Hernandez cannot be dropped.

A long way to go

United fans turned on Rooney two weeks ago when he publicly threatened to quit over what he said was the club's inability to compete in the transfer market for top players.

Their stance has softened since he rescinded that threat and signed a contract that makes him the highest-paid player in United's 132-year history. But he has a long way to go to win back the trust of supporters who idolised him since he scored a hat-trick in his United debut at age 18.

Towns across Britain light bonfires and set off fireworks every year to commemorate the failure of a November 5 plot to blow up parliament and King James I in 1605.

Bonfires are traditionally topped with an effigy of conspirator Guy Fawkes but, in a sign of Rooney's unpopularity, the southeast England town of Edenbridge has picked the burly striker.

Nike, which also sponsors United, has stuck with Rooney through the recent trouble, which included Coca-Cola removing his image from cans of Coke Zero following the allegations over his personal life.

But the sports equipment manufacturer would not say just what Rooney can do in Portland that he could not do in Manchester.

"Manchester United's medical and fitness staff have requested access to Nike facilities to deliver a tailored programme of fitness conditioning," Nike said in a statement. "We are unable to share exact details of the programme as these are created between Manchester United and Wayne."