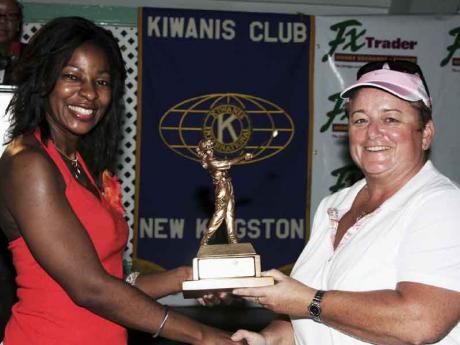 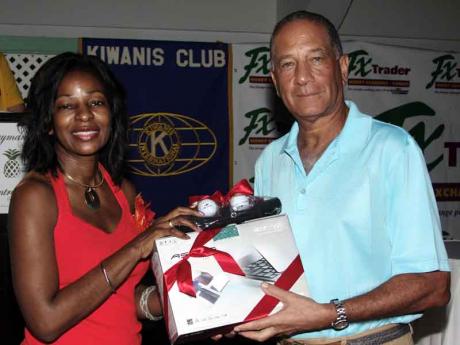 Scotiabank, who took control early, went ahead in the 11th minute when the competition's leading scorer, Richard West, pushed his season's tally to nine.

Jermaine Gardener made a pass down the right wing to Nicholas McCreath, who eluded two defenders and crossed to West, then beat goalkeeper Javon Spence with a well-placed shot.

McCreath sealed the issue six minutes later when he collected a through pass from West to fire home a powerful shot past Spence.

Delano Thomas received a golden opportunity to pull back a goal for JNBS in the 25th minute, but with goalkeeper Tavar McQueen at his mercy, shot high over the crossbar.

Five minutes later, JNBS's Kimario Williams got another chance to score but, with only McQueen to beat after eluding two defenders, shot wide. And a minute later, Mark Powell's free kick from the edge of the 18-yard box was brilliantly saved by McQueen, who dived full stretch to his right to keep the ball out.

Scotiabank dominated the second half, but they failed to increase their tally due to poor finishing from West, McCreath and Stefan Bartley.

It was the third straight year that Scotiabank were winning the competition, closing off a good season in sports for the banking institution which, a week earlier, won the Business House Netball Association Senior League title for the second consecutive year, beating former champions General Accident 48-44 in the final.

The tournament offers a first prize of $50,000 in addition to a trophy, and most of the top players islandwide are expected to compete.

The runners-up will receive $20,000 and a trophy, while players finishing in third and fourth places will each receive $5,000.

Chelsea's Calhoun Melville, one of the island's top players, having won this tournament in the past, has donated a trophy for the player finishing third. Melville also won the second leg of the Cal's Manufacturing/Real Vibes Party Wine pool tour some weeks ago, capping the $80,000 prize.

Meanwhile, funeral service for the late player, Jahrel 'Hype Up' Stephenson, who died after a long illness three weeks ago, will take place tomorrow at the Drax Hall Seventh-day Adventist Church in St Ann, starting at 2 p.m. The Jamaica Billiards Association will be represented by its president, Nicky Lawrence.

The Pattex Cup skittles competition, sponsored by Henkel, was launched last Sunday at 3C Mega Way in Portmore (near MegaMart) with 14 participating teams. Among them are two newcomers - Hangover from Portmore and Zorro from St Ann's Bay. Zorro are no strangers to local skittles having competed in numerous tournaments in the past, while Hangover draw most of their players from the MegaMart Sports Club in Portmore.

The competition gets under way on Sunday, November 14 with two teams from Portmore in action - Hangover and The Dip from Gregory Park. Meadowvale, the top Portmore team in recent years, have withdrawn from competition. Henkel also sponsors the Sistas singles championship, which will come on stream during the latter part of this competition.

Due to the current bad weather affecting the island, the registration window has been extended to next week for teams wishing to participate in the 2010-11 South Central Confed Super League season.

Only two of the 12 teams completed the registration process prior to the passage of Tropical Storm Tomar. This was disclosed by South Central Confed Super League secretariat, which is based at Suite #19, Second Floor RADA Building, Manchester. The teams which have done their registration are newcomers Beacon of St Elizabeth and TruJuice of St Catherine.

Full registration cost is $12,000 with all participating teams mandated to submit full list of players, supporting transfer documents, home ground, colours and alternative colours. The extension, the secretariat revealed, will not affect the scheduled start of the competition on Saturday, November 27.

Both teams failed to score in regulation and extra times and it came down to penalty kicks to decide the outcome.

In the ensuing shoot-out, Mark Miller calmly put Barbican in front with the first kick, while Brenton Smith kicked wide for Constant Spring.

Courtney Crawford gave Barbican a 2-0 lead, but former national player Lincoln Taffe converted for Constant Spring to make it 2-1. Lance Whittaker then missed for Barbican, while Spring's Fabian Watkins levelled the scores at 2-2. Veteran striker Wayne Whonder put Barbican in front at 3-2 before Dwight Morgan levelled at 3-3 for Constant Spring.

In sudden death, defender Andrew Pearson kick wide for Constant Spring, leaving Raymond Williams to get the winner for Barbican. He made no mistake much to the delight of his teammates.

It was Barbican's third hold on the Peter Cargill Cup.

They began the competition with a 3-0 win over Holy Childhood and have since beaten Praise Tabernacle 5-0. Their nine points puts them on top of Zone Three and overall in the standings on goal difference. Sts Peter & Paul, Porter Centre and Hillel have also recorded three straight wins.

The distinction of the highest margin of victory goes to Mona, who annihilated Splendor 19-0. Mona were, however, humbled 2-1 by Quest.

Sts Peter & Paul Prep, who began with a resounding 11-0 win over Waltham Prep, picked up two straight wins this week. They share the lead in Zone Four with Porter Centre. Sts Peter & Paul swamped SOS 6-0 before turning back the challenge of OLA (Our Lady of the Angel) 3-1.

Porter Centre, who began the season with a 3-0 win over Grace Christian, posted wins over Waltham Educational (8-1) and SOS (2-0). Defending champions Lannaman's Prep, who are also in this zone, began their campaign with a 6-0 whipping of Alpha Boys.

Hillel are the early leaders in Zone Two and their three wins have come against Meadowbrook 3-0), Alvernia (3-1) and Morris Knibb (3-0).

Stella Maris and Emmanuel Christian, who played to 0-0 in the opening round, are joint leaders of Zone One with seven points. Emmanuel have since beaten Splendor 10-0 and AISK 7-0 (American International School of Kingston). Stella Maris' two wins came against Gordon's Memorial (7-0) and Ardenne (1-0).

In other games, top-ranked Hangover United are expected to defeat eighth-seed Westchester Nuckuz at Portmore Lane; third-seed Cumberland battle sixth-seed Garveymeade at Ken's Wildflower Sports Bar; whereas an interesting border clash is on the cards as Passagefort United and Waterford United square off at Garveymeade Sports club. All games begin at 1 p.m. The semi-finals are scheduled for next Sunday, November 14, while the final is slated for Sunday, November 21.

The ISSA/Digicel urban schoolgirl netball competition has reached its latter stages and was expected to continue at the Leila Robinson Court on Thursday, but the matches were postponed until next Wednesday, November 10, at the same venue because of the passage of Tropical Storm Tomas.

After weeks of action in the preliminary stage of the competition, 12 teams from both the junior and senior leagues have advanced and are divided into two groups, where the winners will face off with each other for the top prize.

Matches will be played in both junior and senior leagues on the same day, with all games being at the Leila Robinson Court.

Matches in junior action scheduled for Wednesday are:

Portsmouth, currently on four points from two games, clash with Albion FC at the Portsmouth field, in one of three games on in the LIME St Catherine Major League football this afternoon at 3:30. In other games, Dunbeholden oppose McCook's Pen at Dunbeholden field, while Wanderers will face Police at Twickenham Park.