Get your Christmas books! 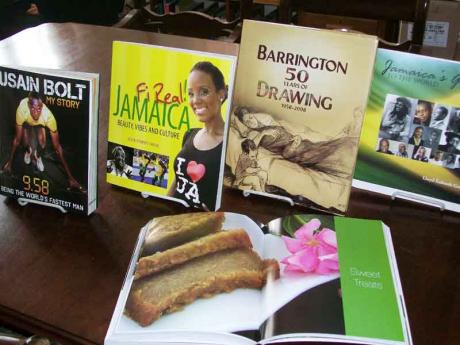 A sample of Ian Randle Publishers' offerings this Christmas. - Contributed

Christmas is just around the corner and with it will come the yearly headache of choosing the right gifts for the right people. Well, why not go for books this year? Books are always popular and it's not as difficult, as you might think, to find books to satisfy all your friends and family. There certainly is no shortage of books to choose from.

Since the launch of Usain Bolt's 9.58: My Story in the third week of October, a new book has been launched every week. Last Sunday, Barrington Watson's collection of his drawings titled Barrington: 50 Years of Drawing 1958-2008 was launched to an appreciative audience of collectors and art enthusiasts at the artist's Gallery Barrington in St Andrew.

The book was written and produced by Jamaicans, not only for a visitor market, but for Jamaicans at home and abroad. It provides a mirror of what is good and celebratory about being Jamaican in a way only we can describe, while attempting to explain to the world how such a small nation can have such global influence.

A feature of the book, which is illustrated with photographs both current and historical, is a 'Top Ten' section on various aspects of Jamaican life, scenes and experiences.

The theme of 'Jamaica to the World' is explored in Jamaica's Gifts to the World by Lloyd Eubank-Green, which contains brief biographies of Jamaicans, both here and in the Diaspora, whose achievements have made an impact regionally and globally. They range from well-known personalities such as Louise Bennett, Bob Marley, Sir Willard White and Lord William Morris, to lesser-known figures like Monsignor Gladstone Wilson, who, at age 23, earned the first of his three doctorates, or Jaunel McKenzie, who was the first Jamaican model to shoot American Vogue. Eubank-Green believes these short biographies, with their stories of persistence, ambition, guts and positive thinking, will inspire young Jamaicans to emulate the achievements of these positive role models.

Rounding off the season of new books is a 450-plus page, lavishly illustrated cookbook titled Tastes Like Home by Guyananese-born journalist Cynthis Wilson. This is not a run-of-the mill cookbook but is rather a conversation about food and traditions in Caribbean homes and describes how, as Caribbean people, we call the same foods by different names and prepare dishes using different ingredients and techniques. Wilson imparts to readers her own style and method of preparing favourite dishes, aided by step-by-step illustrations that will encourage experienced, as well as new cooks to experiment with various dishes from around the Caribbean.

These are just a few of the books that will be hot this Christmas. Over the next few weeks, we will be giving you a peek at others.